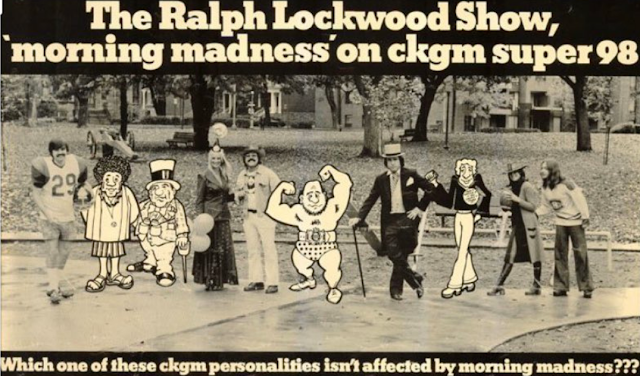 Lockwood was born in Hazleton, PA., where he got his start in the business hosting a nightly polka show in the early 1960s on WAZL 1490 AM.

He made his Montreal radio debut in 1968 at CFOX, but left in 1971 and landed a job on a morning show in West Palm Beach, Fla.  Returning to Montreal in 1972, Lockwood quickly became one of the city’s top morning men at CKGM, then at 980 AM.

An early morning institution, he had a penchant for corny one-liners and double entendres — and doing his show shirtless.

The Montreal Gazette’s Mike Boone once wrote of him: “Lockwood’s constituency never included listeners who liked to be eased out of bed by a radio morning show. But if you were the type who enjoyed being plunged into the day by high-voltage, crack-a-minute radio, the Birdman was a class by himself.”

He left CKGM in 1981, but remained a Montreal media mainstay. He went on to CFCF radio’s afternoon show before moving to TV as host of a daily morning show on CFCF-TV. For a time, he was also the the play-by-play man on the Montreal Concordes’ CJAD football broadcasts, and host of a weekly football highlights show on CFCF TV.

In 1985, CKGM, hoping to revive its flagging morning show, hired Lockwood for five years at a six-figure salary. But the effort failed and Lockwood was fired in 1987.

A year later, Lockwood returned to the United States to host the morning show on WSBA in York, PA. He worked there for 11 years, going on to do radio consulting and public relations.
Posted 1:01:00 AM