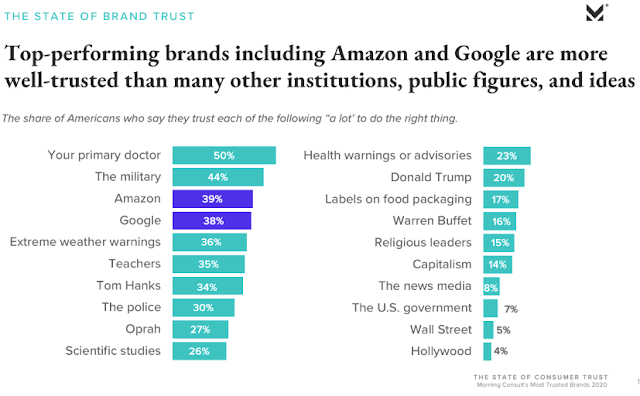 Tom Hanks and Oprah have been trounced in a large-scale survey of trustworthiness by . . . Amazon and Google. Yes, Americans think giant tech companies are much more likely to “do the right thing” than the man who was just nominated for an Oscar for playing Mr. Rogers.

Fast Company reports the nationwide survey, released this morning by Morning Consult, found that the most trusted brands in America are: USPS, Amazon, Google, PayPal, The Weather Channel, Chick-fil-A, Hershey, UPS, Cheerios, and M&Ms. It is, however, a contest of mediocrity, as no brands were found to be particularly trustworthy, with these 10 brands garnering stamps of approval from just 34-42% of Americans.

The survey found Gen Zers to be distrustful of all things capitalist: corporate America, brands, and companies. They are also conscious of corporate behavior and likely to not purchase from a reliable company that they feel is run unethically. This is a stark contrast from the nearly two-thirds of baby boomers who trust most companies as their default position; half support reliable companies regardless of ethics.

In summary, we are a nation of skeptical capitalists. Just 15% of Americans believe that religious leaders will do the right thing, and just 5% trust Wall Street. Hollywood was the least trusted of institutions at 4%.
Posted 1:56:00 AM