Today, according to Music Business Worldwide citing updated Q3 statistics publicly unveiled by both companies this week – Spotify has nearly four times as many as its one-time rival (248m vs. 63.1m).

The most fateful decision in Pandora’s story, it could be argued, was its global contraction: in July 2017, the firm shut down operations in Australia and New Zealand, making it a US-only service, while, since that date, Spotify has expanded into the likes of India, Vietnam and the Middle East (with a launch in Russia now on the agenda).

There are other key factors at play, too, though: for a long time following that isolationist US-only move, Pandora has boasted of being “the largest music streaming service in the US”. 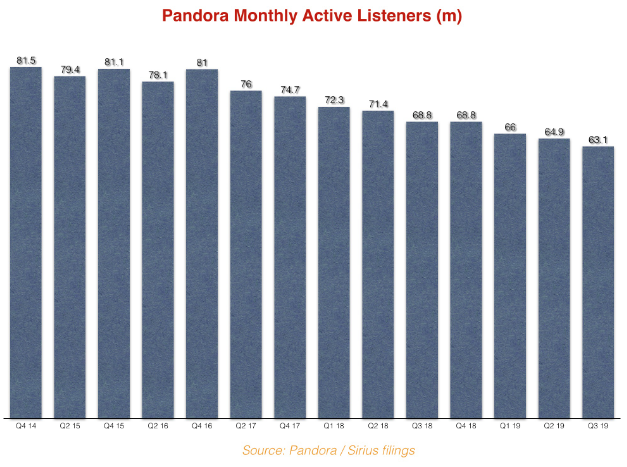 According to the latest Q3 quarterly update from Pandora parent SiriusXM, Pandora ended Q3 with 63.1m active users in the States. That was down 1.8m quarter-on-quarter, and down 5.7m on the 68.8m user count it announced at the same point in the prior year (Q3 2018).

In a growing music streaming market where upward arrows have become par for the course, that 63.1m number is also down by over 18m users on the 81.5m base Pandora announced at its height, in Q4 2014.

Switching attention back to Spotify: Daniel Ek’s company just announced that 27% of its 248m active users in Q3 were located in North America. That equates to approximately 67m Spotify users in the US and Canada.
Posted 10:46:00 AM