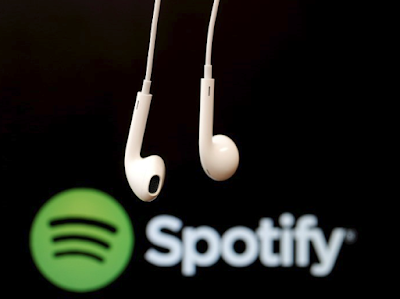 Music streaming giant Spotify on Monday reported a swing to a third-quarter operating profit and said it grew its user base to 113 million premium, or paid, subscribers and 248 million total active monthly users as of the end of September, according to The Hollywood Reporter. 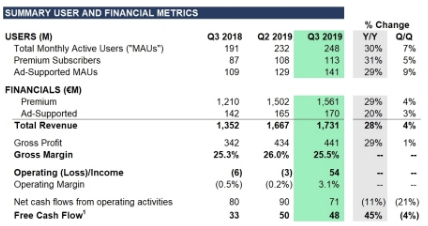 The company's third-quarter user figures exceeded Wall Street estimates. "Net subscriber growth exceeded our expectations and was led by strong performance in both Family Plan and Student Plan," leaving premium subs up 31 percent over the year-go period, the firm said. "Total monthly active users grew 30 percent ..., outperforming the high end of our guidance. Developing regions continue to be a significant driver of this outperformance."

Said Spotify: "We continue to feel very good about our competitive position in the market. Relative to Apple, the publicly available data shows that we are adding roughly twice as many subscribers per month as they are. Additionally, we believe that our monthly engagement is roughly two times as high and our churn is at half the rate. Elsewhere, our estimates imply that we continue to add more users on an absolute basis than Amazon. Our data also suggests that Amazon’s user base skews significantly more to ‘ad-supported’ than ‘premium,’ and that average engagement on our platform is approximately three times [theirs]."

The company also announced transition plans for a new CFO. "After playing a pivotal role in Spotify’s listing and helping to establish Spotify as a public company, Barry McCarthy will retire from Spotify on January 15, 2020, stepping down as the company’s CFO," the company said. He will be replaced by Paul Vogel, who is currently Spotify’s vp of Financial Planning & Analysis, treasury and investor relations.
Posted 7:26:00 AM