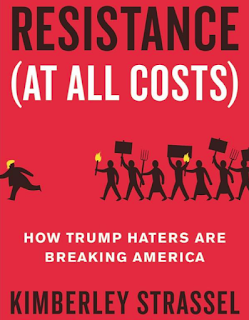 In an opinion piece posted on the Fox News website, Kimberley Strassel writes:

"Last week The Washington Post revealed the alarming news that House Democrats were considering having their anonymous “whistleblower” testify from a remote location, and in disguise. Just as shocking as the details of this plan was the justification the Post ladled on this Democratic effort to hide impeachment information from the public.

"It explained, high up in the story, that the cloak-and-dagger approach was merely Democrats expressing “distrust of their GOP colleagues, whom they see as fully invested in defending a president who has attacked the whistleblower’s credibility and demanded absolute loyalty from Republicans.”

"This, from a newspaper with a tagline of “Democracy Dies in Darkness.” Maybe the better journalistic epitaph is: Democracy dies in bias. How did journalism get here?

"I’ve never engaged much in media criticism, because it’s almost too obvious. Yes, the mainstream media is liberal and biased. But at least in the past, that bias was largely a function of insularity. Most reporters weren’t even fully aware they were prejudiced politically; everyone they worked and socialized with held the same left-of-center views.

"That’s changed in the age of Trump. The press has embraced its bias, joined the Resistance and declared its allegiance to one side of a partisan war. It now openly declares those who offer any fair defense of this administration as Trump “enablers.” It writes off those who question the FBI or Department of Justice actions in 2016 as “conspiracy” theorists. It acts as willing scribes for Democrats and former Obama officials; peddles evidence-free accusations; sources stories from people with clear political axes to grind; and closes its eyes to clear evidence of government abuse.

"This media war is extraordinary, overt and increasingly damaging to the country."

In an excerpt from her new book, “Resistance at All Costs: How Trump Haters are Breaking America,” out Tuesday, Kimberly Strassel of the Wall Street Journal examines how far the press will go in its relentless crusade. Read More Here.
Posted 2:01:00 AM