As the dust settles from last month’s upfront presentations, the television sector showed that it was moderately more vibrant in May than it was the same time a year ago – a positive sign as negotiations for TV’s 2016-17 upfront marketplace gain pace, reports Standard Media Index.

Television and digital media were responsible for driving the overall advertising market into positive territory in May, where total demand increased by 8% on a year-on-year basis.

Despite recent ratings results which suggested a lack enthusiasm for summer programming, cable TV advertising (up 6%) performed strongly in the month, however broadcast networks dipped into negative territory (-1%) when compared to 2015. On a broadcast year-to-date basis, both cable (2%) and broadcast (7%) showed solid growth.

Latest SMI data also tracked strong results in upfront and scatter. While upfront spending has risen 2% through the first eight months of the 2015-16 broadcast year (October-May), the scatter marketplace has expanded eight times that rate: +16%. Both markets grew by 5% YoY across national TV in May. 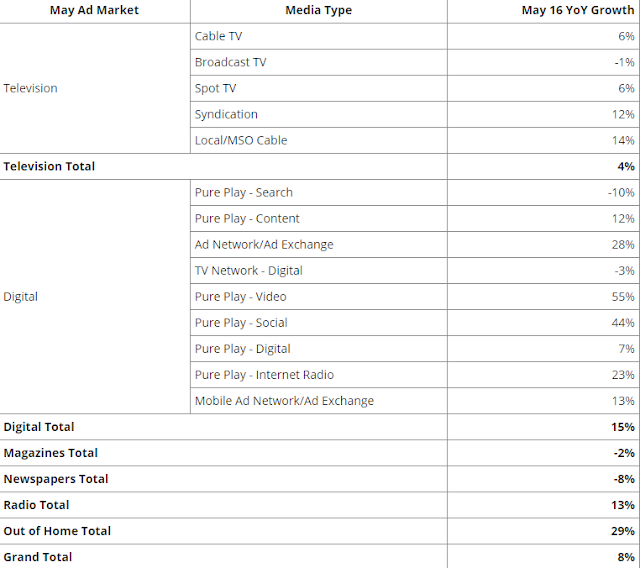 “Off the back of May’s strong results, we expect the networks to deliver very healthy upfront increases in the coming weeks. A 16% increase in scatter dollars through the first half of the broadcast year proves that advertisers are moving money back to TV after some experimentation in digital last year, which didn’t drive the results brands were hoping for,” said James Fennessy, SMI’s CEO.

“It is also fascinating to see the big slowdown in search dollars and the recognition that digital video is where a lot of the action will be happening in the coming months. Excellent new video products from both traditional and new media are capturing an increasing share of the market and we expect this to accelerate as greater and better inventory becomes available.”

In SMI’s fastest-growing sector, marketers increased their investment in digital media by 15% YoY in May, despite digital's largest category, search, declining by -10% YoY.