Raleigh-Durham Radio: The Morning Show OUT At WDNC 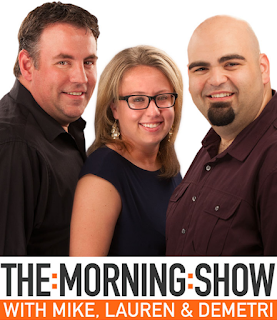 Right after host Mike Maniscalco and executive producer Demetri Ravanos got off the air at 10 a.m. following The Morning Show Thursday on WDNC 620 AM Buzz Sports Radio, they were separately told they were fired. WDNC also simulcasts on translators
W257CS and W243DK.

According to raleighco.com, The other co-host, Lauren Brownlow, who already was on maternity leave, will stay on in another role that will include appearances on other shows and writing for WRALSportsFan.com when she returns in late August or early September.

“They were both very professional about it,” said Dennis Glasgow, the programming director for sports audio at Capitol Broadcasting Company. “It was a pure business decision, that’s all it was.

“We are very excited and humbled to be taking the show to the next level with the move to morning drive,” “Sports Shop” co-host Erroll Reese said. “We are very happy to have the confidence of Capitol Broadcasting behind our show.”

Until July 4, NBC Sports Radio’s “Pro Football Talk Live with Mike Florio” will air from 6-10 a.m. on WDNC with the first hour of the three-hour show repeating from 9-10 a.m. Beginning July 5, Florio’s show will air on delay after “Sports Shop” from 9 a.m.-noon.

“The Morning Show” debuted with a lot of fanfare last September as a show that would emphasize local content, heavily use social media but also would feature non-sports subjects. There were regular non-sports guests, including comedians.

Management hoped that the ratings would improve over the previous show that Maniscalco hosted with Mark Thomas — “The World’s Strongest Morning Show “— but Glasgow said it actually did worse in the ratings. Thomas was let go last July.

Going up against the popular national show “Mike and Mike” on CBC’s sister station, WCMC (99.9 the Fan) certainly didn’t make it any easier.
Posted 4:25:00 AM