More Cars Than Phones Being Connected To Cell Service 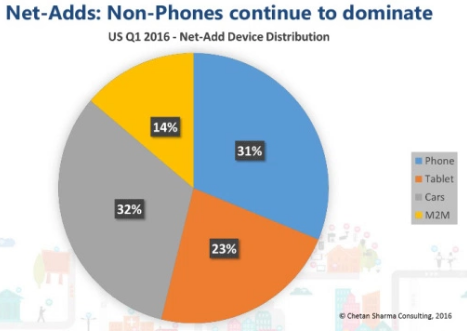 Millions of people in the United States have mobile phones, and we’ve had them for years. They may upgrade phones or change plans, but cell phones and plans are generally sold to people who already have devices. But cellular services aren’t out of new devices to connect—now they’ve got cars.

In the first quarter of 2016, connected cars accounted for a third of all new cellular devices, according to Techcrunch.com.

Mobile-industry consultants at Chetan Sharma noted that there were more cars added to networks than phones and fewer tablets than previously. According to analysts, smartphone penetration is at 84% in the United States, and new customer revenue is approaching zero. But connected cars are still new to the market, so as they roll off assembly lines and into garages, they’ll need to be hooked up to a network.

AT&T has 8 million cars on its network, “probably the highest of any mobile operator in the world,” the report said, and it’s adding more cars than all other operators combined. The company provides communications for everything from vehicle-to-vehicle capabilities, telematics, entertainment apps, over-the-air updates, and 4G LTE hotspots built into the vehicle.

Not that people necessarily know their cars are connected at all. A study also showed that while about half of the respondents were shown how the technology worked at the dealership when they were considering purchasing a vehicle, there were complaints that buyers seemed to know as much as the salespeople when it came to connected features. In its analysis of the study, TNS called in-car education “critical to the uptake and use of connectivity”—especially for those 4 in 10 who aren’t even aware of what their car can do.
Posted 3:38:00 AM