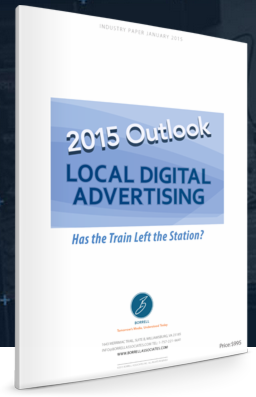 According to Borrell, digital advertising at the local level will grow 42% this year. At that rate it would account for $2 out of every $5 spent by local advertisers. It’s grown to the level of dominance that newspapers enjoyed for years, until the late 1990s.

Four types of companies are forming:
According to the report, traditional print and broadcast media are still a significant market force. At the end of 2014, they accounted for more than two-thirds of all advertising buys. But, digital has gained share faster than another 'new medium' over the past century. It took radio 25 years to peak at a 15% share of all advertising by the late 1940s, and it took television 34 years to peak at a 22% share. Digital exceeded both of those markers in 12 years.

The report found that only four traditional radio companies grew more than the industry average, including Cumulus, Univision, Salem Communications and Pandora.
Posted 6:55:00 AM