A once-classified FBI memo reveals that the bureau treated a senior ABC News journalist as a potential confidential informant in the 1990s, pumping the reporter to ascertain the source of a sensational but uncorroborated tip that the network had obtained during its early coverage of the Oklahoma City bombing.

According to a story by John Solomon and Aaron Mehta at The Center For Public Integrity, the journalist, whose name is not disclosed in the document labeled “secret,” not only cooperated but provided the identity of a confidential source, according to the FBI memo — a possible breach of journalistic ethics if he or she did not have the source’s permission. 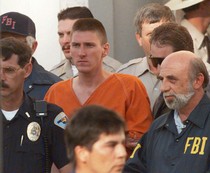 The ABC employee was even assigned a number in the FBI’s informant database, indicating he or she was still being vetted for suitability as a snitch after providing “highly accurate and reliable information in the past” and then revealing information the network had obtained in the hours just after the 1995 terrorist attack by Timothy McVeigh.

The journalist “advised that a source within the Saudi Arabian Intelligence Service advised that the Oklahoma City bombing was sponsored by the Iraqi Special Services who contracted seven (7) former Afghani Freedom Fighters out of Pakistan,” an April 17, 1996 FBI memo states, recounting the then-ABC journalist’s interview with FBI agents a year earlier on the evening of the April 19, 1995 bombing. (The Iraqi connection, of course, never materialized.)

The memo recounts multiple contacts between the FBI and the journalist over a one-year period in 1995-96 but does not name the network insider, instead using the informant number NY290000-SI-DT and a simple description as “a senior official employed by ABC News for over 15 years.”

NOTE:  The Center didn't name the informant, but gawker.com has learned he was Christopher Isham, who is now a vice president at CBS News and the network's Washington bureau chief.