Clear Channel-Dallas Fridat announced the re-signing of long-time morning team, Bo Roberts and Long Jim White on their Classic Rocker, Lone Star 92.5 - KZPS, according to a story at pegasusnews.com. 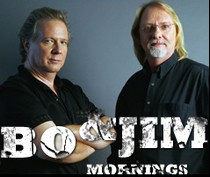 The Bo and Jim Morning Show, including producer and traffic dude, Randy James signs on for another three-years of their antics, continuing their reign as the longest-running rock morning show in Dallas/Fort Worth radio history.

Bo and Jim have been waking up rock fans since 1982 on the defunct, Q102...and have since been the mainstay in the morning, on the 24 year heritage KZPS, now Lone Star 92.5. The Bo and Jim Morning Show; an entertainment-comedy driven local show, that continues to rank at the top of the heap and delivers for both the advertisers and their legions of fans known as "Rascuals."

"Bo and Jim have been a constant factor in the success of Lone Star 92.5, spanning everything from direct competitors and format adjustments to new measurement methodology. Their combination of contemporary content with popular classic rock is a powerfully unique product for our audiences and advertisers. I would not have wanted to start my tenure as Dallas' Market Manager without them on my team," stated Kelly Kibler, President/Market Manager.
Posted 12:58:00 PM