"I am now officially un-retired," said Rich, a 25-year Tucson talent who anchored the top-rated morning show on MIX FM since 1993.  "This is a dream come true for all of us: a chance to select our own music and manage content that matters to Tucson - not some corporate office in Dallas, LA or New York - and have incredible fun while making great radio." 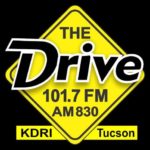 The trio of well-known Tucsonans recently acquired the stations from Family Life Radio after its move to 104.1 and have converted to an original format of music and local, live personalities.

"Bobby is responsible for the format and music collection," said McCusker, chairman of the new board. "And there is nobody better than Jim when it comes to media management."

Branded as The DRIVE, KDRI Tucson originates 24/7 broadcasting from McCusker's old headquarters at Scott and Broadway downtown.  The station is designed to appeal to baby boomers whose radio options have become overlooked and underserved by local radio. With a catalogue of over 2,000 songs, the distinctive presentation will be unlike anything in the region and maybe in the country.

Joining Bobby Rich on the morning show is Hill Bailey, another local radio veteran and a Tucsonan since 1987. She grew up on the Eastside and graduated from Tucson High. She attended the University of Arizona to study media arts and got her first taste of radio on the U of A radio station KAMP. After a decade on the radio in Colorado and California, she returned to Tucson, joined KHYT, married, and welcomed a daughter in March 2017.

Middays are hosted live by Ken Carr, a media veteran who started his career in Nebraska. He fell in love with the people and weather of Tucson in 2001 and has lived here ever since. You've heard him on KRQ, Z104 and MEGA, and you've seen his work as executive producer at KGUN 9 TV. Since 2009, he has run a Twitter channel @WhatsUpTucson, which is 100% local content featuring up to the minute Tucson news and info. The profile has nearly 100,000 followers.

Afternoons, The DRIVE welcomes the famous (or infamous) talent from San Diego known as "The Mikey Show." Mike Esparza is a 30-year radio professional who started his career in Tucson. His years on the air have taken "The Mikey Show" to Dallas, San Francisco, San Diego and now back home.

To host the evening shift, The DRIVE acquires California personality Tyler Russell, currently at KX 93.5 in Laguna Beach and a veteran of the LA radio scene. Tyler grew up in Tucson, is a graduate of St. Gregory High School and started his career as an intern for Bobby Rich before gigs at K-EARTH, KIIS and KCLB in Southern California.

Listeners can hear the KDRI-AM 830 signal while driving from the Mexican border to Phoenix and the new management is enhancing the AM broadcast to improve sound quality.  The DRIVE 101.7-FM signal can be heard all over the Tucson valley, allowing for frequent road reports and local information. The music will be familiar without playing the same 40 songs over and over, and you'll be able to connect with local, live DJs.

"It's crazy to start a new radio station, but we are just crazy enough-and have the passion-to make it work," says Rich.

The DRIVE launched the new format at 6 a.m. on Aug. 5 after a few days of signal testing and the now famous fake format "The Worm"…the world's greatest novelty hits, the brainchild of Bobby Rich, known for his radio stunts from New York, Philadelphia and San Diego.
Posted 10:20:00 AM