“I’ve decided to hang up my headphones and my clipboard,” Jurgensen said in a recorded presentation during the pregame show on the Redskins Radio Network. “It’s been a great 55 years in Washington. I want to thank our Redskins fans for being so generous to me and our teams. We owe it all to you."

This season would have been Jurgensen’s 39th consecutive year in the booth. 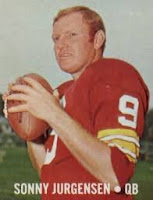 The former quarterback, who will turn 85 later this month, played 11 seasons with the Redskins from 1964 until his retirement after the 1974 season.

He spent six years calling games for CBS before teaming with Hall of Fame linebacker Sam Huff and local sportscaster Frank Herzog on WMAL in 1981, legendary coach Joe Gibbs’s first season in Washington. They remained together until Herzog, whose “Touchdown, Washington Redskins!” call was synonymous with the team’s glory years, was replaced by Larry Michael before the 2004 season.