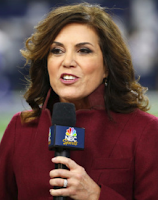 Tafoya previously won in the same category in 2012 and 2014. She has been nominated seven times.

Scott Jameson, Vice President, Classic Rock, Cumulus Media, and Operations Manager, Cumulus Minneapolis-St. Paul, said: “All of us at Cumulus Minneapolis are very proud of Michele winning this prestigious Emmy award. We’re quite fortunate having her on our legendary morning show hosted by National Hall of Fame inductee Tom Barnard and the rest of the morning team."
Posted 3:24:00 AM