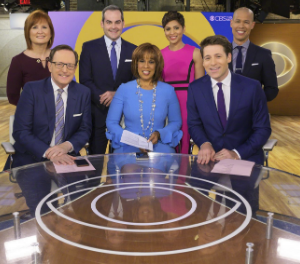 CBS This Morning will have a team of correspondents dedicated to the Network’s flagship morning program, it was announced today by executive producer Diana Miller.

CBS News’ David Begnaud, Jericka Duncan, Anna Werner and Vladimir Duthiers will appear on CBS THIS MORNING along with co-hosts Gayle King, Anthony Mason and Tony Dokoupil to deliver original reporting on the day’s top stories, investigative reports and news-making interviews that will distinguish the broadcast.

“Having a dedicated team of correspondents will provide a consistent, high level of original reporting that viewers can count on each day,” said Miller. “Each one of them brings something different to the broadcast and is focused on our mission of hard news with a heart.”

Their reporting will also be featured on the CBS Evening News, our streaming network CBSN and all other CBS News platforms.

Begnaud becomes lead national correspondent for CBS THIS MORNING and will continue to deliver his award-winning coverage as he travels to the front lines of the important breaking top stories.

Duncan becomes a national correspondent for CBS THIS MORNING delivering original reporting, news-making interviews and stories with impact. Duncan, who has been a CBS News correspondent since 2013, has reported such significant stories as accusations against R Kelly, Bill Cosby and Harvey Weinstein; the shooting deaths of four Marines and a Navy sailor in Chattanooga; the 70th anniversary of D-Day and Normandy; as well as a variety of national breaking news stories.

Duthiers, who serves as a CBS News correspondent and CBSN anchor, will deliver the first look at stories people are talking about each day for CBS THIS MORNING. A Peabody and Emmy Award-winning journalist, Duthiers has covered a wide range of breaking and feature stories from around the globe.

Werner has been named consumer investigative correspondent for CBS THIS MORNING. Already known for groundbreaking reporting on consumer safety and whistleblower stories, she will continue to dig into stories that have impact.
Posted 1:56:00 AM