Spotify To Track How People Consume Audio In Their Car 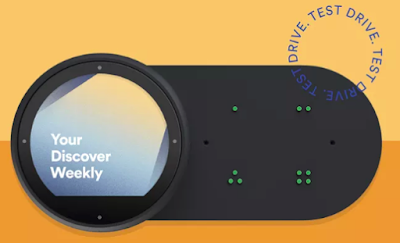 Spotify is about to begin publicly testing its first hardware: a voice-controlled smart assistant for cars, meant to help Spotify learn how people consume audio while they’re driving. As part of the test, some Premium users will receive the device for free.

The device, called Car Thing, plugs into a vehicle’s 12-volt outlet (aka a cigarette lighter) for power and connects to both a person’s car and phone over Bluetooth. The device can be activated by saying, “Hey, Spotify,” followed by a request for whatever the person wants to hear. It’ll be linked to a user’s Spotify account, so they can access their playlists.

Car Thing includes a circular screen on one side, which will show what’s being played. On the other side are a series of buttons that can be used to access playlist presets.

The test, which will be small and begin within the next few weeks and Spotify will reach out to people it’s considering including. The Verge citing a source close to Spotify says the team doesn’t have a hard timeline for how long the test will run, and that there are no intentions to launch this device as-is or to the public more broadly.

In a blog post, Spotify says that Car Thing was developed to “help us learn more about how people listen to music and podcasts.” And despite this being a hardware device, Spotify says its focus “remains on becoming the world’s number one audio platform — not on creating hardware.”

Still, the source says Spotify has trademarked not only the Car Thing name, but also the names Voice Thing and Home Thing, which suggests that Spotify might be interested in creating a home smart speaker or at least piloting a test program with one.

This source says Spotify is running its Car Thing test to learn more about the in-car experience. Spotify already has access to some data about its users’ habits when driving — the team has an integration with Waze, as well as a driving mode, so presumably the app knows when someone is in the car and what they’re consuming. However, if someone is playing music through an auxiliary cable, over Bluetooth, or via another third-party app, Spotify might not know the context for that listening session; Car Thing could change that.
Posted 2:29:00 AM