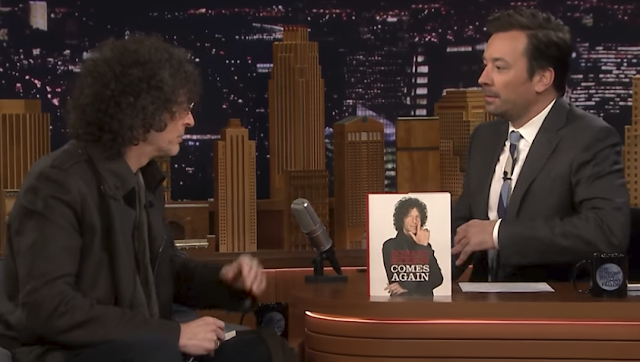 The late-night wars are not what they were in the 1990s, in the days of David Letterman and Jay Leno, reports The NY Times. The viewership figures aren’t what they were back then, for one thing. And the acrimony among the stars of the 11:30 time slot isn’t what it used to be, either.

But, according to the Times, there was a glimpse of the old fire on Wednesday’s edition of “The Tonight Show Starring Jimmy Fallon,” when Howard Stern told Mr. Fallon of the angst he felt in deciding which late-night venue he would select as the venue for promoting his new book.

It was between “The Tonight Show” and CBS’s “The Late Show With Stephen Colbert,” Mr. Stern told Mr. Fallon, and he got so worked up about his dilemma, he said, that he even called Mr. Colbert for advice.

As Stern recounted it for Fallon and his audience, he told Colbert that he was very worried about disappointing Fallon by choosing the CBS show — because Mr. Fallon is “very fragile,” Mr. Stern said. But, he added, Colbert solved the problem by encouraging him to go on “The Tonight Show” first.

Stern talked about it with Fallon starting at the 2:15 Time Mark:


After nearly four years of going head to head with Fallon,  Colbert has bragging rights. He averages 3.8 million total viewers, compared with 2.4 million for “The Tonight Show” and two million for ABC’s “Jimmy Kimmel Live!”

Colbert also looks poised to finish first among adult viewers under 50 for the first time. The CBS host, who surpassed Mr. Fallon among younger viewers a couple of months ago, has a narrow lead, averaging 678,000 viewers in the key demographic to Fallon’s 662,000.
Posted 1:45:00 AM