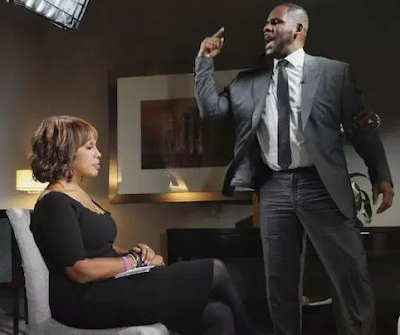 Many of us might have felt any number of emotions while watching R. Kelly melt down during his CBS interview with Gayle King this past week: surprise, outrage, sympathy, confusion. Definitely a few moments of anxiety about King’s safety, watching her maintain her perfect posture and composure while Kelly towered over her, flailing his arms.

According to The Chicago Tribune, Jennifer Freyd was a little more blase than the rest of us. “It’s kind of predictable, sadly,” she says.

Granted, Freyd, a professor of psychology at the University of Oregon, has studied responses like Kelly’s for decades. In fact, she coined a term for the behavior pattern he exhibited in King’s interview: DARVO, an acronym for deny, attack, and reverse victim and offender. In other words, as King said to Kelly during one of his outbursts, “You sound like you’re playing the victim here.”

That, Freyd says, is exactly the point. “I’m glad she labeled it, because that’s exactly what he’s doing.”


During the course of the CBS interview, he maintained his innocence by first denying that he had had sex with underage girls, then moved on to attacking his accusers as liars and suggesting they planned to ruin his career. Eventually, he got around to talking about how he was constantly being victimized because of his “big heart.”

Switching places with the victim, Freyd’s research has shown, not only loosens the bonds of responsibility for the perpetrator, it muddies the waters with a confusion that is so insidious it often extends to the victim’s own perception.

For outside observers, the shifting roles can make things so unclear that the result is often inaction — we no longer are sure where our sympathies should lie, or how to address a situation that seems increasingly unclear.

Freyd views DARVO as a response to confrontation, not as a marker for guilt or innocence, though her research centers on abuse cases, and domestic abuse activists have noted that the pattern is common in abusive relationships.
Posted 4:21:00 AM