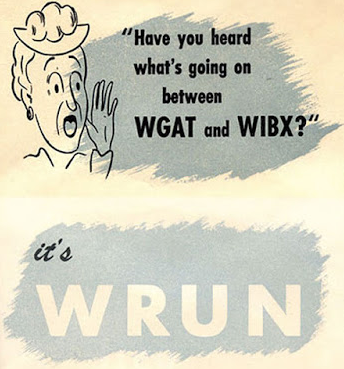 A hertiage AM station has been permanently silenced this week as the Federal Communications Commission offically deleted the license of WUTI 1150 AM (5Kw, 1Kw nights) in the Rome-Utica, NY Market.

WRUN, established in 1948 as WRUN, was last owned by Leatherstocking Media Group, Inc., and simulcast with WFBL in Syracuse until going off the air in 2013.

WUTI signed on April 24, 1948 as WRUN, under the ownership of the Rome Sentinel (Rome-Utica-Newspaper, RUN!).  The Sentinel was concerned that the Utica-Rome area was not being served adequately by WIBX-AM, which, at the time the paper applied for the construction permit in 1946, had a 250-watt signal incapable of reaching Rome at night; in contrast, WRUN, with its 5,000-watt signal, would have more of a regional reach.  (WIBX, which originally was at 1230 AM with 250-watts eventually relocated to 950 AM and upgraded to 5,000 watts.)

Richard Clark, the father of  radio/TV personality Dick Clark was General Manager in the early '50s.  Dick Clark got his start on WRUN.

The Sentinel sold WRUN to Woods Communication Corporation in 1970; by then, it had a middle-of-the-road format, which evolved to a contemporary format by 1974. However, WRUN returned to MOR programming the following year. WRUN again changed its format in 1977, this time to top 40. The station was sold to WRUN, Inc. in 1978  and to Oneida Communications in 1985.

Forever Broadcasting bought the station in 1996. In the fall of 1997, the station began to relay sister country music station WFRG-FM.  Forever sold its stations in the market to Regent Communications in 1999, and the following year, after a brief period simulcasting erstwhile competitor WIBX, WRUN began a adult standards format.

The format continued until 2005; that year, the station was sold to WAMC, who switched it to a relay of its public radio network. However, WAMC had been trying since 1998 to launch an FM relay of the network on 90.3 in nearby Remsen.  When WRUN-FM signed on at 90.3 FM in December 2008, it determined that the AM station was no longer necessary, and sold it to Digital Radio Broadcasting in exchange for a translator in Cooperstown the following year.  Upon assuming control that December, the new owners changed the call letters to WUTI, broadcasting a variety hits format with minimal interruption; by May 2010, the station began branding itself as "Ed 1150", including several thinly-veiled references to Ed Levine, the owner of Galaxy Communications.  That September, Leatherstocking Media Group began programming the station and implemented a simulcast of its Syracuse talk radio station WFBL, once again making WUTI a direct competitor to WIBX. Leatherstocking bought WUTI outright shortly afterward.

WUTI went off the air on May 23, 2013 after vandals stole the station's transmission line; at that time, the station was operating at reduced power, and had also been experiencing briefer interruptions due to unrelated technical problems with equipment used to receive programming from WFBL.