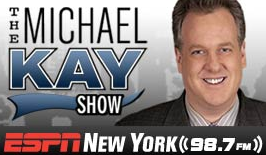 There always is a few ways to interpret ratings.

According to Bob Raissman at NY Daily News, WFAN-660 AM101.9 FM picked up ESPN Radio’s coverage of the All-Star Game from Citi Field and, according to recently released Arbitron ratings, scored a whopping 10.5 share (Men 25-54). ESPN 98.7 FM , which also aired the game, notched a 3.6 share.

Not quite. Remember, for two innings Michael Kay, the host of WEPN 98.7’s afternoon drive show, was yakking away on WFAN about a variety of subjects including his program.

So, on WFAN, a competing station, Kay got the rare experience of actually performing on a radio broadcast that generated a higher rating than the Emergency Broadcast Signal. He also got the opportunity to spread the 98.7 gospel.

And there were plenty of ESPN plugs sprinkled into the WFAN broadcast. So in the end, WFAN’s hefty All-Star rating made a lot of people happy.