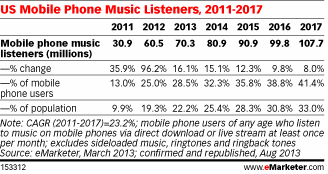 More than one in five Americans will listen to music on their mobile phones this year, eMarketer estimates, after usage nearly doubled in 2012. Listening to music on their phones is now a regular activity for more than 70 million people in the US, and double-digit growth is expected to continue through 2015, when well over a third of all mobile phone users will participate.

Included in this figure are mobile phone users who listen to streaming music, such as via Pandora, Spotify or another digital radio station, as well as those who download music directly onto their phone, via the iTunes Store or a similar service. eMarketer’s forecast does not include listeners who only sideload music from their PC to their phone. 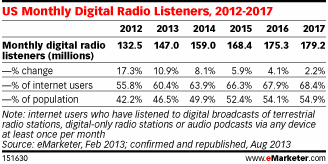