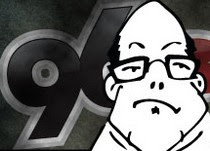 In a nutshell, according to John Kiesewtter's TV & Media Blog at cincinnati.com,  Gamble was burned out from doing 3 jobs, and getting up at 4 a.m.  (That would do it!)

He’s director of NKU’s Sports Business program, which he started in 2002. It now has 300 students.  Sometimes he’d cut it close getting from his 6-9 a.m. gig at 96ROCK to NKU. As he puts it: “I’ve had plenty of mornings changing clothes in a parking lot.”

He started his own sports events company, In-Game Sports, last year, after doing sports marketing and events for 15 years with Don Schumacher, his father-in-law. Gamble runs the Skyline Chili Crosstown Showtown, which he created in 1998. It has grown from 4 games (2 doubleheaders) in one day, to 17 games over 10 days from Dayton, Ohio, to Union, Ky.

Gamble started in radio in the mid 1990s, hosting a Saturday morning high school sports talk show on old WBOB-AM (1160).   That grew into their “Two Angry Guys” morning show on WBOB-AM, WSAI-AM, WCKY-AM and WFTK-FM until 2008.