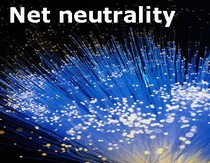 Federal telecommunications regulators approved new rules Tuesday that would for the first time give the federal government formal authority to regulate Internet traffic, although how much or for how long remained unclear.

According to Amy Schatz at wsj.com, a divided Federal Communications Commission approved a proposal by Chairman Julius Genachowski to give the FCC power to prevent broadband providers from selectively blocking web traffic.

The rules will go into effect early next year, but legal challenges or action by Congress could block the FCC's action. Senate Minority Leader Mitch McConnell (R., Ky.) on Tuesday called the FCC's action "flawed" and said lawmakers would "have an opportunity in the new Congress to push back against new rules and regulations."

The new FCC rules, for example, would prevent a broadband provider, such as Comcast Corp., AT&T, Inc. or Verizon Communications Inc., from hobbling access to an online video service, such as Netflix, that competes with its own video services.