Ken Jautz, the new head of CNN's U.S. network, is getting his hands dirty.

According to Sam Schechner at wsj.com, since taking over in late September, Mr. Jautz has started shuffling programming and personnel, looking to turn around a steep slide in audience with injections of personality and debate.

Last week, Mr. Jautz overhauled the network's struggling morning show. He also has replaced a daytime anchor and pushed Anderson Cooper to be more confrontational in his evening show.

"Overall, we have to be more viewer-focused. We have to make our programming more interesting," Mr. Jautz said in an interview. "I think sometimes we have been flat." 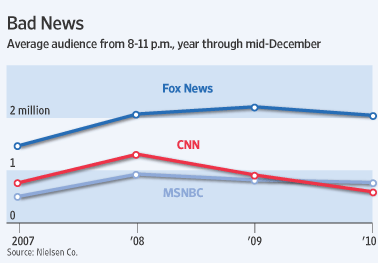 Some viewers agree. So far this year, an average of 436,000 people in the U.S. have watched Time Warner Inc.'s CNN at any given time of day, down 29% from the same point last year, according to Nielsen Co. In the evening, the picture is bleaker—with the audience down 35% from a year ago and off 23% from 2007, before the 2008 election boosted viewership.

By contrast, MSNBC and Fox News have posted sharp gains since 2007.