Internet Gets New Rules of the Road

Consumers for the first time got federally approved rules guaranteeing their right to view what they want on the Internet. The new framework could also result in tiered charges for web access and alter how companies profit from the network.

Amy Schatz and Shayndia Raioce at wsj.com report the Federal Communications Commission on Tuesday voted 3-2 to back Chairman Julius Genachowski's plan for what is commonly known as "net neutrality," or rules prohibiting Internet providers from interfering with legal web traffic. President Barack Obama said the FCC's action will "help preserve the free and open nature of the Internet." 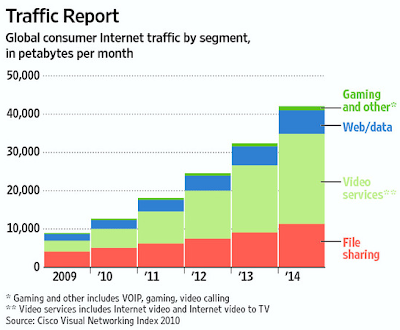 The move was prompted by worries that large phone and cable firms were getting too powerful as Internet gatekeepers.

Most consumers haven't had a problem viewing whatever they want online; few instances have arisen of an Internet provider blocking or slowing services.

Rather, the FCC rules are designed to prevent potential future harms and they could shape how Americans access and use the Internet years from now. In the future, the Internet industry will be increasingly centered around the fastest-growing categories of Internet traffic—online video, gaming and mobile services, analysts say. Cisco Systems Inc., the broadband network provider, has forecast those services could quadruple by 2014.

The FCC's decision is a mixed bag for consumers. The new rules—which haven't been released in full—say that land-line broadband providers can't block legal content from websites, or "unreasonably discriminate" against companies like Skype or Netflix that want to use broadband networks to provide video or voice services. They also require providers to give consumers more information about their Internet service, like actual download speeds or usage limits.