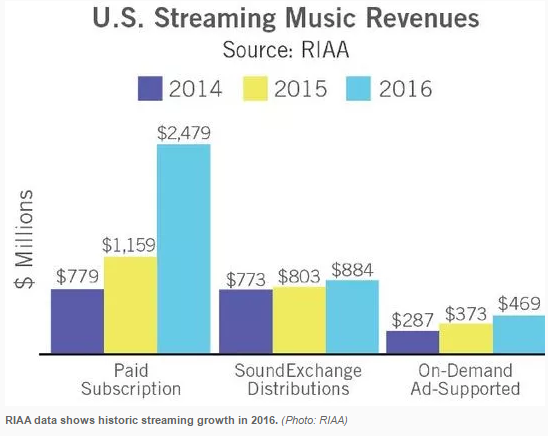 According to The Tennessean, overall music streaming saw 68 percent growth in 2016 compared with the year before, and the numbers were even more encouraging for subscription-based services from Spotify, Apple Music and Amazon. Subscription services enjoyed a spectacular 114 percent increase last year, rising to $2.5 billion. That's a crucial number to the U.S. music industry, which remains at least somewhat resistant to free streaming, with some artists still withholding their music from services like Spotify's free offering. 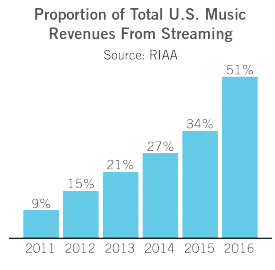 In short, the primary way people listen to music shifted dramatically in 2016. Streaming, and not downloads or physical album sales, is now king, and subscription services are the industry's top growth area.

Spotify has most recently reported 50 million global subscribers, and Apple Music, which completed its first full year in 2016, has reported 20 million. Amazon does not disclose its subscriber numbers. And Pandora, which built its company on an online radio model, rolled out its on-demand streaming service, Pandora Premium, late last year.

Total U.S. retail sales reached $7.7 billion. That represented 11.4 percent year-over-year growth, which was the largest single year gain for the music industry since 1998.

The rise of streaming has been stark. In 2011, total revenues from streaming platforms accounted for 9 percent of the market compared with 51 percent last year. 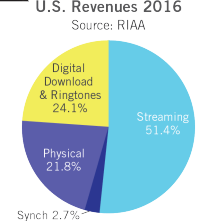 With streaming emerging as the primary consumption method for music fans, record labels have had to shift their strategies. They can now expect a popular release to have a longer sales life compared to when CDs and digital downloads ruled and an album would see its sales taper off after a relatively short period of time.

The 2016 sales report from RIAA wasn't all good news. RIAA Chairman and CEO Cary Sherman pointed out in a companion note to the sales report that overall revenues are only now rising after about 15 years of steady decline from the late 1990s. Total sales revenue in 1999 approached $15 billion.

While overall sales were up, CD sales dropped by 21 percent, continuing their plummet, and digital downloads went down 21.6 percent. Vinyl music has been booming over the last decade, enjoying over 30 percent growth each of the past several years. Vinyl sales, however, saw modest 3.7 percent growth in 2016 with 17.2 million units sold.
Posted 4:15:00 AM