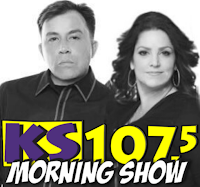 The long-running KQKS KS107.5 FM morning show radio with Larry and Kathie J will come to an end this week.

A spokesperson for the Entercom, the parent company of the Denver radio station, says as of Monday April 3, the show will no longer be airing.

The two sides were unable to come to an agreement on a new contract, according to 9News.

"Larry and Kathie have been an important part of the station for many years,'  said  Esther-Mireya Tejeda Vice President of Corporate Communications and Public Relations. "We wish them both well."

The show has aired weekdays from 5 to 10 a.m. for years. Kendall B left the show earlier this year.

Entercom says they will launch a nationwide search for their replacements.
Posted 4:11:00 AM