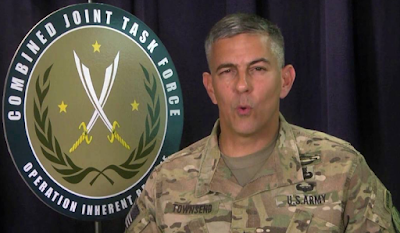 Lt. Gen. Stephen Townsend, commander of Combined Joint Task Force Operation Inherent Resolve, had just fielded questions from the Pentagon press corps for 45 minutes last Tuesday, and he felt it was time to inject a little moral clarity into the conversation.

Townsend, in an audio briefing piped in from Baghdad, has just conceded that there was "a fair chance" that a U.S. airstrike played a role in the deaths of more than 100 Iraqi civilians when a building, or buildings, collapsed on a narrow Mosul street in the midst of some of the most demanding house-to-house, door-to-door urban combat since World War II.

But he thought the reporters, with their single-minded focus on why the American-led air campaign, touted as the most accurate in the history of warfare, had taken the lives of innocent civilians including women, children and babies, was missing the bigger picture: They weren't targeting civilians, the Islamic State is.

And so the three-star general let out his frustration over the tone of the questioning. "[It's] a little disappointing to me that all the questions were about our airstrikes, and our process, and our decisions," Townsend said, beginning his lecture to Pentagon reporters.

"If these innocents were killed by the coalition, it was an unintentional accident of war, and ISIS is slaughtering Iraqis and Syrians on a daily basis," Townsend said. "ISIS is cutting off heads. ISIS is shooting people, throwing people from buildings, burning them alive in cages and they are making the video record to prove it. This has gotta stop. This evil has gotta be stamped out. And in my mind any responsibility for any civilian deaths, the moral responsibility for civilian deaths in Iraq and Syria belongs to ISIS."
Posted 5:01:00 AM