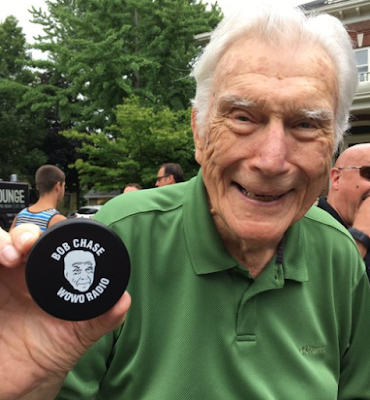 He was 90-years-of-age, according to the Fort Wayne News-Sentinel. Chase had been battling congestive heart failure for several months.

Perhaps no one in Fort Wayne history did more to promote the city, just as it's possible no one has ever introduced hockey to more new fans or caused more to love it. Chase's voice was known to generations across the country and throughout several countries during his 63-year tenure with WOWO 1190 AM / 107.5 FM and the Komets.

Throughout the 1950s and much of the 1960s, Chase's broadcast on WOWO was the only one throughout the International Hockey League and the only hockey broadcast throughout much of the rest of the country. During the era of six NHL teams, the game he saw was the only one to visualize for many young fans who'd fall asleep listening to their transistor radios hidden under the covers. Today there are millions of hockey fans because Bob Chase introduced their fathers, grandfathers and maybe even great-grandfathers to the game.

Born Jan. 22, 1926, in Negaunee, Mich., Chase’s actual name was Robert Donald Wallenstein. However, when he came to Fort Wayne in June 1953, WOWO Program Manager Guy Harris thought Wallenstein was too long. He changed his last name to Chase, his wife Murph’s maiden name. Her father, who was blessed with five daughters but no sons, loved it.

He started as a co-announcer of Komets games with Ernie Ashley, and then took over sole duties in 1954.

This would have been his 64th season with the Komets. The team added his name to the franchise’s retired honorees banner at his 40th anniversary in 1992, and honored him again for his 50th year in 2002 and his 60th in 2012.


During his career with WOWO, Chase interviewed such people as Elvis, the Beatles, Jim Brown, Frank Sinatra, Bob Hope, Vice President Nixon, Gordie Howe, Arnie Palmer. His interview with Elvis is part of the Rock & Roll Hall of Fame in Cleveland.

During his tenure, the Komets have gone through five sets of owners, 25 coaches, more than 1,000 players and 70 different opposing teams. Of the Komets' 532 playoff games during their 64-year history, Chase has called 526 of them. Of the Komets' 4,890 regular-season games, Chase has likely called around 4,500 of those.

Besides broadcasting hockey, Chase announced high school basketball for 17 years, also broadcast Big Ten football for 10 years and covered the Indianapolis 500 for 25 years. From 1954 to 1967 he hosted "The Bob Chase Show" Monday through Friday afternoons on WOWO.
Posted 5:15:00 AM