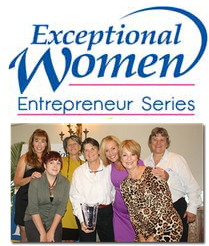 Co-hosts Candy O’Terry and Sue Tabb will receive Gracie Allen Awards from the Alliance For Women in Media in the categories of Portrait/Biography series and Best Soft News feature for “Love Is All Around”, a series about three Boston based charities: Love Lane Special Needs Horseback Riding Program, Lucy’s Love Bus and Lovin’ Spoonfuls.

“We are so proud of our Exceptional Women, Candy O’Terry and Sue Tabb, for their dedication to advancing the great work of women in New England who are making a difference in the lives of others,” said Mary Menna, general manager of WMJX-FM. “The Magic Exceptional Women Series has won a total 43 awards since its inception.”

Created by O’Terry in 1992, the Exceptional Women show has now earned a total of 23 Gracies and 20 other local and national awards for excellence in women’s programming. The show airs on Sunday mornings on WMJX-FM/Magic 106.7 at 7:30am and profiles inspiring women.

Candy, Sue and their producer Tina Gao will accept their awards at the annual Gracies Luncheon to be held in New York City on June 22nd, 2015.
Posted 3:04:00 AM