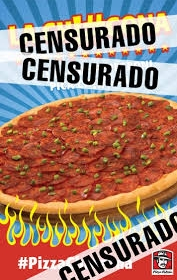 Dallas-based pizza chain, Pizza Patrón, has made a business of catering to particular patrons... Mexican immigrants, who happen to be the restaurant's core customer base. The restuarant is about to launch a new promotion that employs a Mexican slang term that means "super cool" to some, while others find the term deeply offensivem according to The Latin Post.

Sarah Portnoy, teacher of Hispanic culinary culture, stated that she would translate the phrase to mean "bad-ass pizza." She then went on to say that it isn't a word that one would use in front of their mother.

"It's not a word I'd use in front of my mother-in-law. It's a word that my 20-something nieces and nephews use among themselves," said Portnoy.

“Our new pizza seems to be causing a lot of challenges for news media outlets,” Andrew Gamm, brand director for Pizza Patrón, told Yahoo. “There is a great deal of misunderstanding surrounding the word 'Chingón' and how it is commonly used in today's culture, particularly among younger Mexicans. Although the term sounds similar to a common Mexican profanity, it is not intended to offend. On the contrary, it is a compliment of the highest order.”

Pizza Patrón says the company's new advertising campaign would not be permitted to air on a number of major radio station . The decision came just weeks ahead of the radio spots planned premiere in Texas Markets on Monday, March 31.

La Z, a Spanish radio station that broadcasts in San Antonio, is airing the commercial but bleeping the pizza's name, according to mysanantonio.com.
Posted 3:17:00 AM