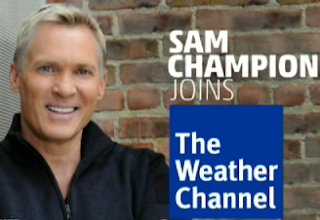 The Weather Channel's Sam Champion will anchor a new three-hour morning show from 7 to 10 a.m., ET beginning in March. The show will follow Al Roker's "Wake Up with Al."

He will also cover major weather stories. The network's president, David Clark, said of hiring Sam Champion, "We got our No. 1 draft pick."

According to examiner.com, on Saturday Champion reacted to critics pointing out that he is not a meteorologist or a climatologist.

"I'm just a guy that started in this business 30 years when my family couldn't afford to spend a lot of money getting degrees," Champion told them.

The Weather Channel will increase the former "GMA" anchor's visibility despite its lower ratings than ABC's morning news show.