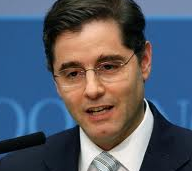 UPDATE 3/22/2013 10AM:  Julius Genachowski, the Federal Communications Commission chairman since June 2009, who set out ambitious plans to expand broadband Internet service throughout the country and to free up additional airwaves for sale to mobile phone companies, said Friday that he would leave the commission “in the coming weeks.”

No successor has been named, according to nytimes.com. Genachowski’s departure, on the heels of the resignation earlier this week of Robert M. McDowell, a Republican commissioner since 2006, will leave the agency with only three of five board spots filled, although Democrats will retain a 2-to-1 majority.

The decision brings to an end a tumultuous term that has seen bruising battles over the openness of the Internet to the reform of the nation's major telephone subsidy.

The decision to resign has been expected for months. The Democrat’s decision would come in the same week that senior GOP Commissioner Robert McDowell announced his plan to leave.

Nominations for critical agencies like the FCC are often paired, making it easier to get the confirmation through the Senate if there is one Republican and one Democrat.

Genachowski took over as chairman in 2009 and pushed the agency to look at telecommunications differently with broadband supplanting old technologies like broadcasting and telephone service.

He managed to win approval for the first major overhaul of the Universal Service Fund, pushed through controversial network neutrality rules and popularized the idea of an incentive auction that would move some TV broadcasters off their channels and open them up for advanced, high-speed services.

Genachowski also oversaw a series of telecommunications deals that helped reshape the landscape. The Comcast/NBC-Universal deal was approved by the FCC on his watch, as was a deal that allowed Verizon to purchase the wireless licenses held by a consortium of cable companies. Most recently, the commission approved the deal that allowed T-Mobile to buy a controlling stake in MetroPCS.

He also pushed the commission to kill AT&T's attempt to buy T-Mobile despite GOP objections.