Though Julianne Hough is known for her bubbly personality, it turns out not everything in her life has been so charmed, according to Antoinette Bueno at ET Online.

Julianne covers Cosmopolitan's February issue, where she reveals she suffered mental and physical abuse while living in as a young girl to pursue her dancing career. She attended the prestigious Italia Conti Academy of Arts on a five-year scholarship, along with her brother Derek.

"While I was in , I was abused, mentally, physically, everything," she reveals, and it didn't stop there -- she says it got worse when she "started hitting puberty, when I started becoming a woman and stopped being a little girl."

Julianne of course did return to the , where she became a star thanks to her winning performances on Dancing with the Stars. 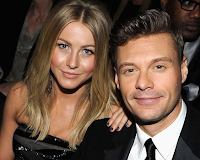 On a lighter note, Julianne also dishes to the magazine about her relationship with KIIS 102.7 FM morning host and host of American Idol, Ryan Seacrest.

"We love what we do. We take pride in giving it our all, but then when we're alone, we really focus in on going to dinners and being extra-romantic and affectionate and just being there for each other," she says.