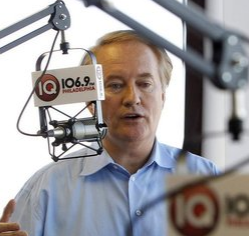 Larry Mendte posted on his Facebook page that he had been let go from conservative talk radio station WWIQ IQ 106.9, where the former anchor had been serving as morning drive host. In the post, the gracious Mendte makes it clear that his departure from the station was not his decision.

In an interview with the Daily News, Mendte said there was no indication why he was let go from the station, who gave Mendte his walking papers on December 21. Mendte believed his show had solid ratings and loyal fanbase. "It just never really had a spot. They were trying to find a place for it," Mendte said. Mendte, unlike the other hosts, did not have a contract.

Mendte doesn't know what's in store for IQ 106.9, although rumors have swirled that the station might be sold. Mendte himself has another gig to fall back on: He does commentary pieces for 's Pix11.