Radio veteran Jon Anthony has died.  He passed-away Saturday at his home in   He had been battling illness for quite sometime.

He was also Production Director at WFLZ-FM "933 FLZ" and News-Talk 970 WFLA Tampa from 2000-2003 and recently owned and operated Jon Anthony Productions, .

In an interview in 2009 with the Tampa Tribune, Anthony talked about his collection of photos with music artists.

"If my house were to catch on fire, I would grab my wife, my son and that picture of Michael Jackson, and we would hit the door," Anthony said. "That's how big that picture is to me."

Anthony had lunch with in 1981. He spent an hour and a half with the pop star, who was cutting tracks for the album "Thriller" at a studio next door.

He met after he was called over by a record executive pal who noticed outside the studio. The two men approached and asked him if he'd like to join them for lunch in the record exec's office.

Anthony calls it an experience he will never forget. He says the three of them ordered sub sandwiches and talked about everyday topics like sports and the weather. They were trying to steer away from subjects like celebrity that might make feel uncomfortable.

"I could not believe how friendly he was, how nice he was, and how relaxed he was, "Anthony said. "It was almost like he had escaped out of that world that he was so used to and got to come into the real world with some real people and eat a sub sandwich." 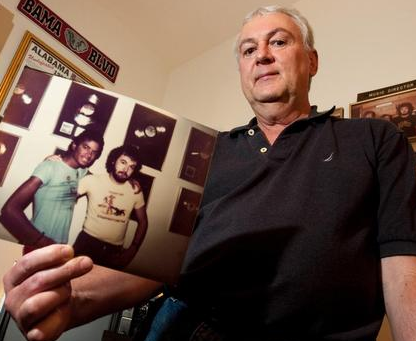 The photo of Anthony and Jackson was snapped before their lunch. "I didn't realize I was going to be having my picture made with one of the biggest entertainers in the world!"
Posted 2:59:00 PM