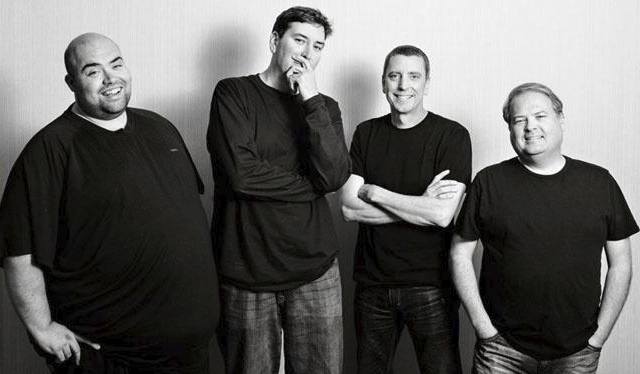 2 Guys Named Chris (2GNC), the nationally syndicated morning show that is known for intelligence with a cutting edge, celebrates 20 years on the radio this month.

Produced at flagship station WKRR-FM Rock 92 in Greensboro, NC, the team, consisting of Chris Kelly, Chris Demm, their partner Dave Aiken, and producer Biggie, has received numerous awards and accolades, including a 2015 NAB Marconi Award and North Carolina Broadcasters’ 2016 Morning Show of the Year Award. The show has achieved #1 ratings with Men 25-54 in both Nielsen and Eastlan, in both diary and PPM methodology.

Dick Harlow, COO of Dick Broadcasting Company, owner of Rock 92, shared how impressed he is with this team, “Over the last 20 years, 2GNC has developed into a powerhouse program delivering the most compelling content in the industry. Chris Kelly, Chris Dem, and their teammates, Biggie and Weather Dave, have got to be the hardest working men in radio.”

As one might expect from air talent of this stature, the team is humble and philosophical about their success and their longevity. “Now that we’re 20, we look forward to being able to have a beer...in one year,” commented co-host Chris Demm. Producer Biggie was equally thoughtful in his reaction, “Well, I've been here for ten of the twenty years so...I've only lived half this nightmare!” The other Chris of the show, Chris Kelly, was a bit more reflective, “After the first show we were told we wouldn't last twenty days so, I guess we're pretty proud.”

Jason Goodman, VP of Programming for Dick Broadcasting company summed it up nicely, “20 years flies by when you're having fun, right?  A morning show that started from scratch and that became dominant for two decades is special. The 2 Guys Named Chris Show is expert in delivering compelling content, and it has been our pleasure for them to be a part of our community.”

“They said it wouldn’t last twenty days, but somehow a morning show with the logical, yet improbable name 2 Guys Named Chris is celebrating its 20th year on the air,” quipped Tony Garcia, Founder of Global Media Services, who syndicates the show on radio stations across the country, from Texas to West Virginia.

2 Two Guys Named Chris airs M-F 6A-10A Eastern Time and is available on a market-exclusive basis. Global Media Services is the exclusive syndication representative for the show. For more information, stations may contact Garcia at 303-916-6333 and garciatony60@gmail.com.
Posted 3:10:00 AM