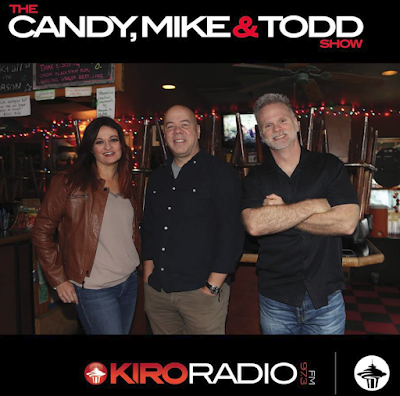 “This is an exciting moment in the continuing evolution of KIRO Radio,” says Dave Pridemore, VP/Market Manager for Bonneville Seattle Media Group. “We feel that Candy, Mike and Todd will bring a variety of fun, entertaining and diverse perspectives that best represent the communities that KIRO Radio serves.”

“We’ve put together what we feel is a winning team,” says KIRO Radio Director of News and Programming Ryan Maguire. “Candy, Mike and Todd are a fun, entertaining and intelligent trio. They will be a perfect complement to the news, traffic and weather elements that KIRO Radio listeners expect every weekday afternoon.”

Candy Harper most recently served as the afternoon producer on KIRO Radio. She came to the station in 2015 as a traffic reporter and held roles as a weekend and fill-in host as well. Harper grew up just Southeast of Seattle on Lake Sawyer, where she got the itch to do radio at a young age. Prior to coming to KIRO Radio, she hosted successful shows at radio stations in Madison, Charlotte, Albany and Seattle.

“I can’t wait to get started,” says Harper. “Mike, Todd and I are three opinionated friends who may disagree on almost everything but love to talk about why. Turns out, people are quite capable of disagreeing on issues and still being decent human beings. This show is going to be unique.”

Mike Lewis has worked at KIRO Radio as a reporter and fill-in host since 2016. Originally from Modesto, California, he moved to Seattle in 2000 when he began working for the Seattle Post-Intelligencer as a politics and policy reporter. Locally, he has also worked as regional editor for AOL’s Patch.com. Prior to living in Seattle, he spent eight years working for McClatchy Newspapers, and two years working for the Los Angeles Daily Journal.

“This is a great opportunity and I’m excited to work with Candy and Todd,” says Lewis. “Listeners can expect a show that is authentic, relatable and well-informed. Hopefully, we can provide listeners with something that makes their commute home a little more enjoyable.”

Todd Herman has been the afternoon show host on KIRO Radio’s sister-station KTTH-AM since 2015 and worked as a fill-in host on both KIRO Radio and the nationally syndicated Rush Limbaugh Show. A Spokane native, Herman has a vast background in broadcasting, technology and politics. Prior to KTTH, he worked in Washington D.C. as the Chief Digital Strategist for the Republican Party. Additionally, he started the MSN Video business unit for Microsoft and founded the first internet radio network, The Dial.

“This job is a dream come true for me,” admits Herman. “One of my goals in life is to be a force for bringing people together and to lend a genuine, conservative point of view to major media. I feel this show will truly do that. Candy, Mike, and I view life very differently. If you don’t want to live in a bubble, you’ll enjoy what the three of us have to say.”
Posted 4:22:00 AM