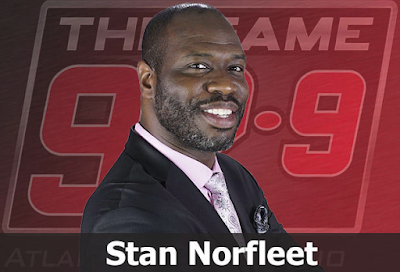 Weekend WZGC 92.9 The Game host Stan Norfleet got himself fired from his part-time gig after he made a complicated comparison between the Atlanta Falcons coach firings and the Holocaust.

On New Year’s Eve, Norfleet provided this commentary soon after the firings happened. 11Alive captured his thoughts from a podcast recording before the station removed it from the site:


"Dan Quinn, firing all three coordinators. What does this mean?

It's simple ... I'm going to use an analogy here, but let's not be so serious.

With the concentration camps ... the Nazis would put folks in a container, and they would slowly suck the oxygen out of the container.

And what they found, it got so hot in there, and the pressure was so intense in there; that when they opened up the containers, they found, there was almost a pyramid of bodies trying to get to the top, to get the last breath of oxygen ... before, obviously, the fatal outcome.

Now, I know that's gruesome, I don't mean it that way. Y'all know I just think differently. That's what Dan Quinn did today.

Dan Quinn knows ... there are no more excuses. These are the casualties that come along with the nasty side of the National Football League."

According to ajc.com, a listener called the Entercom station to complain to the producer after he heard this commentary.

“He went into graphic details that are very disturbing and upsetting,” the man emailed me Wednesday. “I am infuriated at what he said.”

Norfleet was fired later in the week.

The Falcons forwarded a statement from the radio station: “We just learned of comments made earlier this week by a part-time, fill-in host. These comments are abhorrent, repulsive and insensitive. We have terminated our relationship with him. He will no longer appear on the station. We sincerely apologize to the Falcons organization, Coach Quinn, our listeners and our community.”

The Atlanta Falcons games are aired on 92.9/The Game so there is clearly a sensitivity between the team and what is heard on air on the sports talk station.
Posted 3:58:00 AM