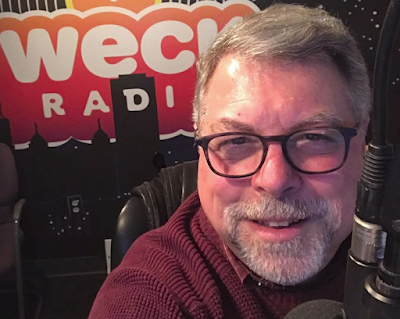 Joe Chille is returning to his former home at WMSX 96.1 FM on Jan. 21 to become the morning host at a station now called “The Breeze,” after changing formats from Mix 96 the day after Christmas.

Chille made the announcement in a brief Facebook post and confirmed it today in a phone interview, reports The Buffalo News.

“I’m thrilled,” said Chille, who worked at 96.1 FM for 34 years before resigning from the station in August 2012 when its call letters were WJYE-FM.

Chille has been working two jobs – as afternoon man part-time at WECK Radio for the past year and as district supervisor for several Tim Hortons in the area for the past six years.

He said the two jobs have led to 13 1/2-hour days and improving his quality of life was the pitch from the two people from Townsquare Media who convinced him to return to 96.1. 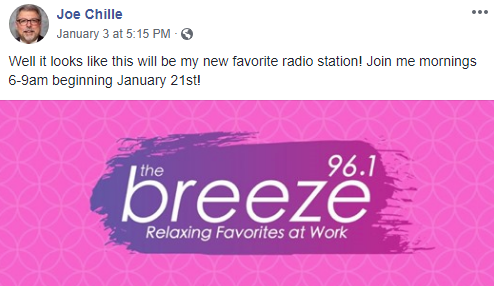 He is waiting until Jan. 21 to start his new role to give his two employers a two-week notice.

Chille said his return started with a telephone call from Mark Plimpton, who runs the local stations in Buffalo, and that was followed up by another call from Rob Williams, a regional vice president for Townsquare.

Chille noted he has worked with both men before.

“I thought my life was settled,” said Chille, who praised the two bosses he has been working for recently.

Chille already has his opening line planned for Jan. 21.

“Where have all you people been for the past six years?” Chille cracked.

Meanwhile over at WECK, Radio One Buffalo, LLC announced that Glenn Topolski would now lead all aspects of on-air programming for WECK-AM & FM and assume Chille's former Monday-Thursday afternoon shift. Market legend Danny Neaverth does afternoons on Fridays.
Posted 4:02:00 AM