Disney's Iger Gets 81% Increase In Compensation 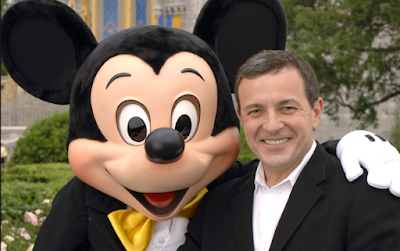 According to The Wall Street Journal, the biggest driver of the increase was $35.4 million in stock awards, a portion of which was due to the extension of his contract through December 2021. Iger’s salary for the year ended in September rose to $2.9 million from $2.5 million.

The value of all of Mr. Iger’s stock-award holdings, assuming that the highest level of performance conditions are achieved and the deal for 21st Century Fox Inc.’s entertainment assets closes, would be $149.6 million for 2018, according to the filing with the Securities and Exchange Commission.

Following shareholder pushback, Disney’s board last month raised the targets Mr. Iger would have to clear to collect his performance bonus. Disney shareholders had rejected, in a nonbinding advisory vote, the compensation plan for Mr. Iger and other executives.

In comparison, Mr. Iger’s total pay a year earlier was valued at $36.3 million, which included $9 million in stock awards.
Posted 4:05:00 AM