Recognizing the need to attract and engage younger listeners to Urban AC radio, Westwood One, the largest audio network in the U.S., plans to revolutionize the format with the launch of Rick and Sasha, debuting today. 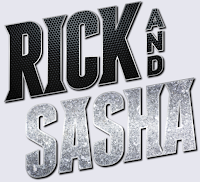 Rick and Sasha features two of the most popular Urban voices in the country -- former Hot 105 FM/Miami personality Rick Party and former Kiss 104.1 FM/Atlanta personality Sasha the Diva. Both have major market ratings success and plan to turn that experience into ratings gold in national syndication. Rick and Sasha will entertain and engage 25-54 Urban AC listeners looking for great music, hot conversation, a connection to community, and interactive discussions, while super-serving females 35-44.

Armando Rivera, a former programmer at WVAZ/Chicago and a current Urban radio consultant, weighs in on the current state of Urban Adult radio and the pairing of Rick and Sasha. “Urban AC Radio can't be locked in with what worked 20 years ago. A person who was 20 in 1998 is now 40 years old, and like everything else, the format needs to evolve and adapt. The cycle of life is out with the old and in with the new. Right now, the new is Rick and Sasha,” says Rivera. “I don't see anyone outside of them that can take the mic and execute successfully while also adapting to where Urban AC radio needs to be at this time.”

The Rick and Sasha team recently added former network executive Tanita Myers to head the Production/Operations team for the show. Myers spent the last 14 years at Reach Media, most recently as Senior Director of Radio Operations. Myers is excited to be on board with “something that is so fresh, new, and authentically energetic.”

Mike McVay, EVP of Content & Programming for CUMULUS MEDIA and Westwood One, says, “Rick and Sasha will be the next big stars for the Urban AC format. Stations receive programming and talent that can win not just now, but for the next five and 10-year cycles. It’s the most exciting thing that has happened in Urban radio in a very long time, especially within an industry in need of undeniably rich content. Their chemistry is so natural and memorable.” 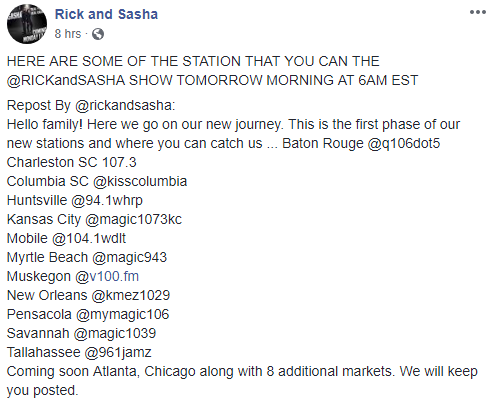 Rick and Sasha airs live mornings from 6-10 am in all time zones across America and is available for other dayparts and Urban formats. You can hear more from Rick and Sasha in this video.