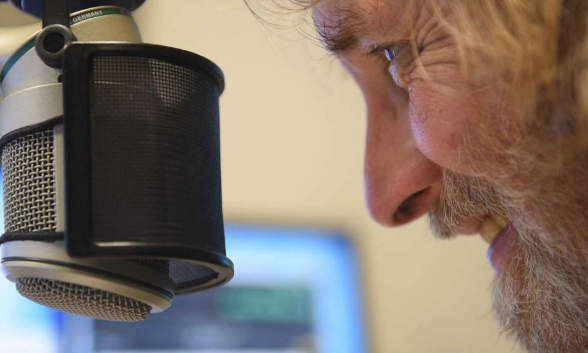 WDVE radio personality Sean McDowell put on Don McLean’s “ American Pie,” an 8-minute-and-33-second tune, thinking there was plenty of time to get to the men’s room and back.

Well, McDowell got locked inside the bathroom.

The year was 1986 and he was working on a Saturday, back in the days before everyone had a cellphone. One of his co-workers noticed the dead air — it had been close to 40 minutes — and came to the station and found him.

“That wouldn’t happen today,” says McDowell from his studio at WDVE 102.5 FM. “With all the digital technology and cellphones … and the main bathroom doors here swing in and out, so they don’t lock.”

According to to triblive.com, that’s just one of many quirky tales McDowell has to tell about his four decades in radio, 25 at WDVE, Pittsburgh’s preeminent classic rock station that plays international, national and local music. He’s watched the industry transform from turntables and vinyl records to a computer system where — with the touch of a button — you can change songs, artists and genres.

His father Al McDowell, a broadcast pioneer and Pittsburgh icon, wanted his son to be a journalist. He thought radio was too cut throat and too down-and-dirty.

But the lure of radio was strong for Sean McDowell. He got his first radio job at WYDD in New Kensington but was fired after two years when a new program director said the station was going in a different direction.

He then worked at WYTK in Washington, Pa., for one year but left to sell cable television door-to-door for five months before getting a job at FM 97. He worked there from 1981-1993 before settling in at WDVE.

“There aren’t a lot of stations left that play classic rock and local rock because there is so much competition,” says McDowell, 63. “But Pittsburgh is the kind of city where people grew up listening to WDVE because their grandparents and parents did. I know I always listened to WDVE.”

McDowell had to take a short hiatus from the station last summer to have open-heart surgery. It was an operation he knew he had to have for about a year. It was time for a valve to be repaired.

McDowell quit smoking in 1999 — after a pack a day of Marlboro Red for years — and then stopped drinking alcohol in 2017 because he was diagnosed with congestive heart failure.

It was hard to be away from the profession while he recovered from the surgery because it’s all he has known his entire life, but it helped to have the support of his wife, Cindi, McDowell says.

“This is not an easy business,” he says. “You work late nights and holidays and weekends. Radio never shuts down. I definitely have a face for radio. I also can’t really sing. I hum along. It’s best if I don’t sing. I flip around the stations when I am in the car.

“I have always loved music,” he says. “I grew up listening to local radio. I was fascinated by radio. People don’t recognize me too much visually, but they often recognize my voice and say ‘Don’t I know you?’
Posted 2:05:00 AM