Listeners to NPR stations are aging faster than the overall radio audience and listening less to the network’s most popular radio programs, according to new data shared by the network.

According to current.org, NPR is seeing some listening gains on digital platforms, particularly with podcasts, but its broadcast audience has dropped. Average–quarter-hour (AQH) listening during morning drive time has dropped 11 percent in the past five years, and afternoon drive audience has declined 6 percent. The only age bracket that has increased listening to NPR stations is the 65-plus audience.

In addition to the overall AQH drop during morning drive, Morning Edition has seen a 20 percent drop among listeners under 55 since 2010, according to Gwynne Villota, a senior research manager at NPR, who shared the Nielsen data. 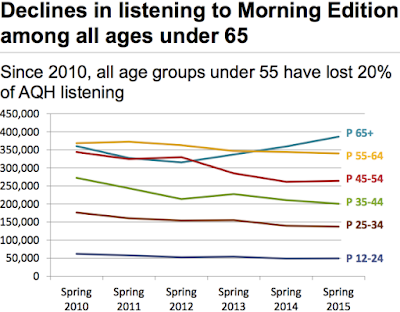 Morning Edition saw about a 6 percent increase in AQH among 65-plus listeners since 2010. All Things Considered also saw slight AQH gains among listeners ages 12-24 and 55-64 and a roughly 10 percent gain for 65-plus listeners. But AQH listening for the show dropped by roughly 24 percent among 45- to 54-year-olds.

Among all radio stations, AQH for listeners 54-years-old and younger dropped from spring 2012 to spring 2015. News and talk stations, both commercial and noncommercial, saw AQH decline in all age groups — most dramatically among 45- to 54-year-olds, for which AQH dropped 24 percent. NPR stations saw a 20 percent decline in AQH in that age bracket.