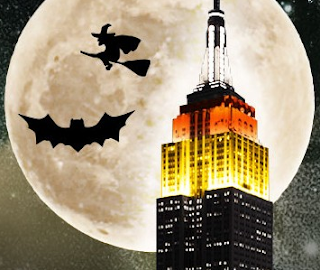 The iconic landmark will synchronize its world-famous LED tower lights to spooky Halloween hits, broadcast on iHeartMedia's powerhouse radio stations WHTZ Z100.3 FM  and WKTU 103.5 FM and via the iHeartRadio app at 6:45 p.m. and 10.pm. on Saturday, October 31, 2015.

Renowned lighting designer Marc Brickman will choreograph the display to a soundtrack including fan favorites from previous Halloween shows as well as new additions "Disturbia" by Rihanna, "E.T." by Katy Perry and The Addams Family theme song.

The presentation will be visible to trick-or-treaters, revelers and tourists along New York'sGreenwich Village 42 [nd] annual Halloween parade route, as well as from various vantage points around New York City and the Tri-State area.  A video of the entire show will be posted on the Empire State Building's YouTube channel right after the show for fans around the world to enjoy.  Fans can use the hashtag #ESBoo on social media channels to join in the excitement.

"The Empire State Building and iHeartMedia's Halloween light show attracts unprecedented attention from a global audience and has become an annual, viral visual sensation," said Anthony E. Malkin, Chairman and CEO of ESRT.  "ESRT and iHeartMedia's music-to-light shows are must-see annual spectaculars that define the holidays and special occasions in New York City and around the world."

"The Empire State Building, Z100 and KTU are three New York icons," said Tom Poleman, President of National Programming Platforms at iHeartMedia. "We're excited to partner by syncing our music to the tower lights, creating something special for New Yorkers while they celebrate one of the city's biggest holidays."
Posted 3:02:00 AM