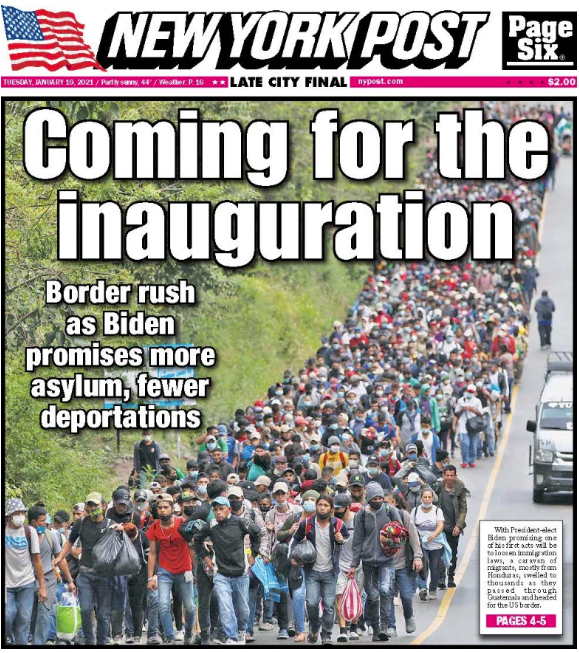 President-elect Joe Biden plans to unveil immigration legislation on his first day in office that would provide an eight-year path to citizenship for the 11 million people living in the U.S. illegally. If passed, it would amount to a major reversal from President Trump's restrictive immigration policies and mass deportations, but its prospects in a Congress that is narrowly divided in both the House and Senate would be uncertain. 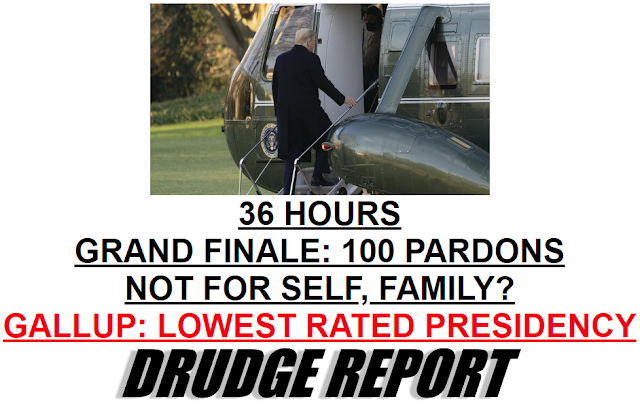 ➤RAPPER LIL WAYNE, EX-NYS ASSEMBLY SPEAKER REPORTEDLY ON TRUMP'S PARDONS/COMMUTATIONS LIST: President Trump is expected to issue a list of around 100 more pardons and commutations today, and ABC News reported that rap star Lil Wayne and the former powerful speaker of the New York State Assembly, Sheldon Silver, are on the list. Lil Wayne pled guilty last month to illegally possessing a loaded handgun while traveling to Florida on a private plane a year earlier. Silver was convicted on corruption charges and sentenced to jail last summer.

Trump is likely to grant clemency to rapper Lil Wayne in a final wave of pardons and commutations that is not expected to include lawyer Rudy Giuliani or ex-aide Steve Bannon, sources said https://t.co/Pi3NzDCXYa

It had been reported Sunday that Trump is not likely to issue a pardon for himself, and yesterday's report said he's also unlikely to issue pre-emeptive pardons for his children and other close associates.

➤BIDEN INAUGURATION TO FEATURE VIRTUAL 'PARADE ACROSS AMERICA': President-elect Joe Biden's inaugural festivities Wednesday won't include the traditional parade down Pennsylvania Avenue in Washington, D.C., because of the coronavirus, one of several usual events that have been reimagined or canceled due to the pandemic. Instead, there will be a virtual parade, called "Parade Across America," following his swearing-in and a visit to Arlington National Ceremony to lay a wreath at the Tomb of the Unknown Soldier. The parade will include performers and other representatives from all 50 states, and the Presidential Inaugural Committee said Monday (January 18th) that it will celebrate the nation's heroes and highlight the diversity, heritage and resilience of the United States. The virtual, livestreamed parade will begin at 3:15 p.m. ET with Biden and Vice President-elect Kamala Harris getting a presidential escort to the White House, which will include the University of Delaware Drumline and the Howard University Drumline from Biden and Harris' alma maters, and representatives of every branch of the military, including the U.S. Army Band, a Joint Service Honor Guard, and the Commander-in-Chief’s Guard and Fife and Drum Corps. The virtual parade will feature performers and speakers in communities across the country, with participants including: comedian Jon Stewart; musician Nile Rodgers; singer and actress Andra Day; Olympic athletes Nathan Chen, Allyson Felix and Katie Ledecky; and skateboarder Nathan Apodaca, whose Fleetwood Mac TikTok went viral last year.

"This is the most perilous time for journalists in the field in the modern history of the United States," @MurrowNYC told @brianstelter on @ReliableSources on Sunday, but the job local journalists in particular do every day has never been more important.https://t.co/8KsROqaGDl

➤CORONAVIRUS DEATHS RISING IN 30 STATES, HAVE PASSED 399,000: Coronavirus deaths are rising in 30 states amid the ongoing winter surge, as the total number of deaths as of early this morning was just over 399,000, according to Johns Hopkins University's data. As hospitals and health care workers are already under severe strain in many states, a new mutated variant from the U.K. is already spreading in the U.S. that the Centers for Disease Control and Prevention said is about 50 percent more contagious, and the CDC has warned it will likely become the dominant strain in the U.S. by March. While it's not more deadly, the variant can cause more hospitalizations and deaths because it's more contagious. Meanwhile, the vaccine effort is continuing to lag behind expectations, with only about 10.6 million people having received at least one dose, according to federal data, even though about 31.2 million doses have been distributed.


➤RUSSIAN OPPOSITION LEADER NAVALNY ORDERED JAILED FOR 30 DAYS: A judge ordered Russian opposition leader Alexei Navalny jailed for 30 days Monday after he'd returned to Russia the day before from Germany and was arrested as soon as he landed in Moscow. Navalny had been recovering in Germany for months after a near-fatal nerve agent poisoning that he charges the Russian government was behind. After the order for his jailing, Navalny's allies called for protests this weekend across the country, and Navalny himself said in a video statement, "Don’t be afraid, take to the streets." Russia's prison service said Navalny had violated probation terms of a suspended sentence on a 2014 money-laundering conviction, which he says is contrived and politically motivated.

Fmr. DHS officials spanning the Bush, Obama and Trump admins. say the siege of the Capitol exposed the shortcomings of an agency with an inexperienced staff and a misplaced focus on immigration instead of the rise of domestic threats over the past 4 years. https://t.co/Wxsji59D0i

➤STUDY: LATTES ARE THE COFFEE DRINK THAT LEAVES THE BIGGEST CARBON FOOTPRINT:  Coffee may help many make it through their days, but a new study finds lattes are the caffeinated beverage that leaves the biggest carbon footprint. University of College London looked at four standard Starbucks orders and compared their carbon footprints. Lattes, which are made with the most milk, had the biggest carbon footprint, followed by cappuccinos, flat whites, and then dairy-free espressos. The researchers note that using non-dairy alternatives would make your drink much more eco-friendly, as would buying your caffeinated beverages from coffeehouses that buy sustainably-sourced coffee beans.
➤MAJOR AIRLINES REVEAL HOW MANY PASSENGERS ARE BANNED FROM THEIR FLIGHTS: Thousands of Americans have made it onto a collection of lists people would rather avoid—the “no-fly” lists of the nation’s major airlines. Upward of 2,730 Americans have been placed on these lists, that prohibit them from flying with a certain carrier. This only applies to U.S. airlines that keep such lists and also share the data, including Alaska (303 on their no-fly list), Delta (over 880), Frontier (over 500), Spirit (432), or United (615). The number does not include any prohibited passengers from American, Hawaiian or Southwest. Both Alaska and United have also confirmed that at least a tenth of their now-banned passengers (so 32 for Alaska and 62 of United’s) had been added since the week of January 4th. This uptick in passengers comes as the TSA increases security scrutiny ahead of the inauguration of President-elect Joe Biden tomorrow (January 20th).

Some potentially good news from Jay Glazer on Patrick Mahomes. Indicated Mahomes’ issues were more related to symptoms similar to getting “choked out” than a concussion, but still has to clear the concussion protocol. #Chiefs pic.twitter.com/ZZgoxAkKLW


🏈MAHOMES IN CONCUSSION PROTOCOL: Kansas City Chiefs star quarterback Patrick Mahomes remained in the NFL's concussion protocol Monday after suffering a concussion in the third quarter of the Chiefs' divisional-round win over the Cleveland Browns on Sunday, forcing him to sit out the rest of the game. With the AFC conference championship game against the Buffalo Bills coming up next Sunday, Chiefs head coach Andy Reid wouldn't speculate yesterday on when Mahomes would be cleared to play. He said, "You just go forward. You have an answer if he’s there and if he’s not there. I can’t tell you an answer from a medical standpoint. I just don’t know." If Mahomes isn't able to play, backup Chad Henne, who came into the game on Sunday for him, would start against Buffalo. 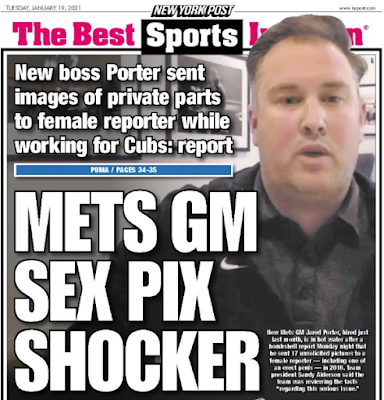 ⚾METS GM FIRED AFTER REPORT OF TEXTS, LEWD PHOTOS TO FEMALE REPORTER: UPDATE 1/19 9AM: Mets general manager Jared Porter was fired Tuesday after sending graphic, uninvited text messages and images to a female reporter in 2016 when he was working for the Chicago Cubs in their front office.  Earlier report...
The New York Mets released a statement late last night after ESPN reported that the team's new general manager, Jared Porter, send unsolicited texts and lewd photos to a female reporter in 2016 when he was with the Chicago Cubs. Mets President Sandy Alderson said Porter, quote, "acknowledged to me his serious error in judgment, has taken responsibility for his conduct, has expressed remorse, and has previously apologized for his actions." He continued, "We will follow up as we review the facts regarding this serious issue." ESPN reported that the now 41-year-old Porter sent a barrage of texts after meeting the reporter in 2016. The woman initially engaged in conversation with Porter, but stopped after he sent her a lewd photo. Porter continued to send her texts, and then sent an even more explict photo. The reporter responded, "This is extremely inappropriate, very offensive, and getting out of line. Could you please stop sending offensive photos or msg." ESPN said Porter told them last night that the pictures weren't of himself, stating, "Those are like, kinda like joke-stock images."

🏈TENNESSEE FIRES FOOTBALL HEAD COACH PRUITT, NINE OTHERS FOR 'SERIOUS' RULES VIOLATIONS: Tennessee fired football head coach Jeremy Pruitt and nine others yesterday after an internal investigation found what the university Chancellor Donde Plowman called "serious violations of NCAA rules." Tennessee conducted the probe after getting a tip last November about allege recruiting violations. The others fired were two assistants and seven members of the recruiting and support staff.


🏀FIVE STRAIGHT WIZARDS GAME POSTPONED DUE TO CORONAVIRUS ISSUES: The Washington Wizards' game that was scheduled for Wednesday (January 20th) against the Charlotte Hornets was called off yesterday due to coronavirus issues, their fifth straight game that's been called off. It's also the 14th NBA game overall that's been postponed since January 10th due to players testing positive or contact tracing leading to teams having less than the minimum required number of players. The Wizards had six players test positive late last week and three others were ruled out because of contact tracing.

⚾REPORTS: LESTER AGREES TO ONE-YEAR DEAL WITH NATIONALS: Veteran pitcher Jon Lester has agreed to a one-year deal with the Washington Nationals, according to media reports Monday, pending the results of a physical. The 37-year-old was with the Chicago Cubs for the past six seasons, and went 3-3 in 61 innings and 12 starts last year.

🏡NETS' IRVING BOUGHT HOUSE FOR GEORGE FLOYD'S FAMILY: Former NBA player Stephen Jackson revealed on The Rematch podcast that Brooklyn Nets player Kyrie Irving bought a house for the family of George Floyd, whose death at the hands of Minneapolis police last May led to weeks of protests against racism and police brutality. Jackson, who was a close friend of Floyd, said that Irving and other celebrities had reached out to help Floyd's family, stating, "Kyrie Irving bought them a house. Lil Wayne's manager bought them a Mercedes-Benz. Barbra Streisand gave them stock in Disney."
Posted 4:25:00 AM