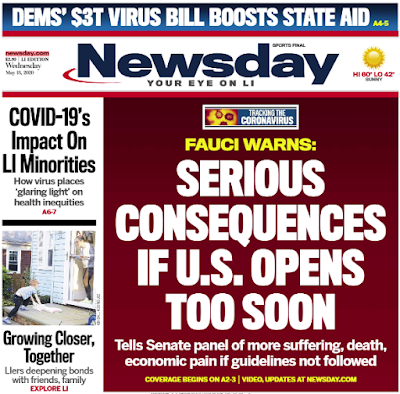 Dr. Anthony Fauci warned in testimony to a Senate committee Tuesday that cities and states could see more deaths and economic damage if they reopen from their coronavirus shutdowns too quickly, saying it could, quote, "turn back the clock."

In testimony delivered by teleconference from his home, the nation's top infectious disease expert said, "There is a real risk that you will trigger an outbreak that you may not be able to control." The warning contrasted with President Trump's push for states to reopen. There were both Republican and Democratic members of the committee who spoke about the need for more testing, with Republican Chairman Lamar Alexander saying, "all roads back to work and back to school go through testing." But Republican Senator Rand Paul was more dismissive of Fauci's warnings, saying he wasn't the, quote, "end all" in knowledge about the virus. Fauci said he never made himself to be the, quote, "only voice in this."

Governor Andrew Cuomo said Tuesday that New York is investigating about 100 cases of a mysterious inflammatory syndrome in children that's thought to be related to the coronavirus. Three young people in the state have died of the syndrome, which affects blood vessels and organs and has symptoms including persistent fever, rash, abdominal pain and vomiting. There have been children in other places in the U.S. and in Europe that have also been hospitalized with the syndrome. Dr. Juan Salazar, the physician-in-chief at Connecticut Children’s Medical Center, said the rare syndrome often appears two to four weeks after a child has recovered from the coronavirus, often without ever being diagnosed with the virus. Dr. Anthony Fauci spoke about the syndrome during his Senate testimony yesterday about the coronavirus, saying, "I think we better be very careful that we are not cavalier in thinking that children are completely immune to the deleterious effects."

In another development:
➤PELOSI UNVEILS $3 TRILLION CORONAVIRUS AID LEGISLATION: House Speaker Nancy Pelosi unveiled a more than $3 trillion coronavirus aid bill yesterday, saying, "We must think big, for the people, now. Not acting is the most expensive course."

Nearly $1 million of the money in the bill, which would be the fifth coronavirus aid package, is for states and cities to help them avoid layoffs. It would also give a second round of $1,200 payments to Americans, add another $10 billion to the popular Payroll Protection Program, give another $100 billion to hospitals and other health care providers, and include a $175 billion housing assistance fund to help people pay their rent or mortgage. Other provisions include: $200 billion in "hazard pay" for essential workers on the frontlines; $75 billion more for coronavirus testing; a 15 percent increase for food stamps; and an employee retention tax credit for businesses. There is also $25 billion for the struggling U.S. Postal Service.

The Democratic-led House is expected to vote on the legislation as soon as Friday, but Republicans are wary of another aid package, and top GOP senators spoke against the bill. Senate Majority Leader Mitch McConnell said of the legislation yesterday that it's not something that, quote, "deals with reality." 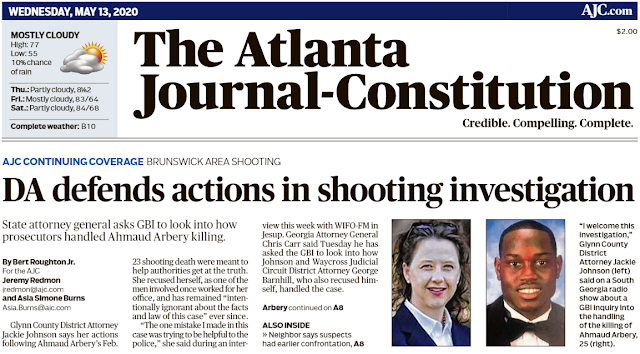 ➤LOCAL PROSECUTORS IN ARBERY CASE UNDER INVESTIGATION: Georgia Attorney General Chris Carr announced yesterday that he's asked the Georgia Bureau of Investigation and federal authorities to investigate how local authorities handled the February killing of Ahmaud Arbery. The 25-year-old black man was fatally shot outside the city of Brunswick after a white father and son grabbed guns and chased him in a truck when they saw him running through their neighborhood. They told police they believed he looked like a burglar who'd been seen on surveillance video. Gregory and Travis McMichael weren't arrested and charged with murder until last week, more than two months later, after cellphone video of the shooting was released, leading to an outcry. Carr said he's asking for the review, quote, "to determine whether the process was undermined in any way." Carr on Monday appointed Cobb County District Attorney Joyette Holmes to take over the Arbery case. She is based in Atlanta, which is far from Brunswick, and is one of only seven black DAs in Georgia.

➤GROCERY COSTS UP MOST IN 46 YEARS: The prices Americans are paying for groceries are up the most in 46 years as people have stocked up amid the coronavirus pandemic. The Labor Department reported Tuesday that grocery prices were up 2.6 percent in April, the largest one-month jump since February 1974. The increases were across a broad range of groceries, but were highest for meat, poultry, fish and eggs, up 4.3 percent. Prices for cereals and bakery products were up 2.9 percent, for fruits and vegetables up 1.5 percent, and for dairy goods also up 1.5 percent. The grocery price increases were in contrast to U.S. prices generally, which fell 0.8 percent in April, the largest one-month decline since 2008, as demand has plummeted for other products.

➤REPORT: POLL SHOWS NBA PLAYERS WANT TO RESUME SEASON IF SAFE: An informal poll taken by the National Basketball Players Association found overwhelming support among players for resuming the season as long as it's done in a safe way, the Associated Press reported last night. The poll reportedly showed that not only do players want to get to the playoffs, but would like to resume at least some of the regular season. Meanwhile, Yahoo Sports reported that some of the NBA's biggest stars formed a united front to resume the season during a private conference call Monday. Among those reportedly on the call were LeBron James, Anthony Davis, Kevin Durant, Giannis Antetokounmpo, Kawhi Leonard, Stephen Curry, Damian Lillard and Russell Westbrook.
Posted 4:25:00 AM