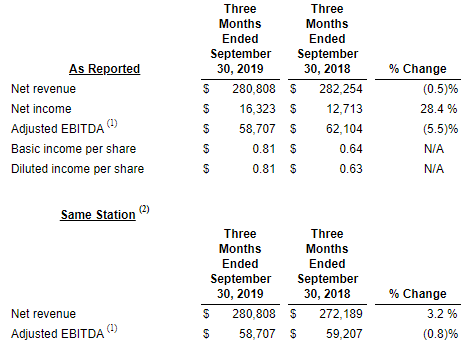 Mary G. Berner, President and Chief Executive Officer of CUMULUS MEDIA, said, “In the third quarter, the Company turned in another strong performance with same station revenue and Adjusted EBITDA growth of 3.9% and 2.2%, respectively, on an ex-political basis.  Our operating plan has continued to deliver industry-leading digital revenue growth and continuing growth in our national and network channels.  We also made great progress in the quarter on our balance sheet as our free cash flow generation allowed us to fund a voluntary debt prepayment of approximately $29 million, which reduced net leverage to 4.5x.  Additionally, we completed a $525 million term loan refinancing that extended our debt maturity and reduced future interest expense.”

During the investor's call with analyts, Berner highlighted what she called "meaningful contributions" in the quarter from standout stations and brands.

"Our best performing markets for the quarter where Chicago, Cincinnati, DC, Indianapolis and Baton Rouge. And speaking of Indianapolis, I would also note that we are continuing to benefit from the swap transactions that we completed in Q2.

"The station (WNDX 93.9 FM) we flipped to rock format to fill a gap in the market is enjoying ratings increases of over 100% year over year, with multiple consecutive months of impressive ratings growth. And across the entire Indianapolis cluster on a same station basis, we grew by double digits in the quarter.

"In Allentown, the other market we expanded for swap transaction, we mentioned last quarter that WODE-FM posted a number one in the spring book and that ratings traction converted to revenue share gains in September for the market.

"In a number of other markets we've also made some significant programming moves under our new Programming Head Brian Philips. A few examples. In San Francisco, we've been working to cement the leading position of our heritage sports brand KNBR. We signed Greg Papa voice of the 49ers to a multiyear deal and then added FM distribution to the station by flipping KFOG-FM to a simulcasts of KNBR.

"In its first month on the FM band rating share for KNBR skyrocketed, up 73% year over year. We also recently resigned our powerhouse morning show in Houston, The Roulette and Ryan Show on KRBE-FM to a multiyear deal, securing the station's leading position in the market. Notably KRBE also received a Marconi award this year, radios most prestigious annual award for CHR Station of the Year.

"In particular Ben Shapiro's success in the 18 to 49 demo has been impressive, with listenership up more than 60% in the simulcasts broadcast of his podcast, and up over 40% is live show from the fall 2018, spring 2019 book. In aggregate our strength in news talk positions us particularly well for what we expect to be a very robust political environment as we countdown to the 2020 elections."
Posted 2:53:00 AM