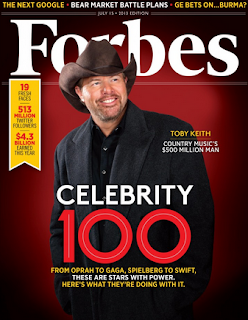 Toby Keith’s commercial chops, overlaying a wide patriotic appeal, have created the most vertically integrated performer in the music business–and a one-man cash machine. FORBES estimates that Keith pulled in $65 million over the last 12 months–more than any musician not named Madonna, Lady Gaga or Bon Jovi, and easily outpacing masters of product extension like Jay-Z ($42 million), Beyoncé ($53 million) and Jennifer Lopez ($45 million).

The long-term figures are even more impressive.

Over the past five years, FORBES estimates, Keith has never earned less than $48 million in a year. His cumulative take over that period: $270 million. Over his entire career–Keith has written a No. 1 country hit every year for the past two decades–his total earnings surpass $500 million. “He’s built this little empire, and he did it kind of quietly,” says concert promoter Louis Messina. “Not many people have been able to pull it off as long as he has.”

So why don’t most Americans know much about Keith? Ask him, and he’ll frame it as something of a conspiracy: “Years ago politics branded me as a cat that was an extreme right-wing guy. Media doesn’t want to cover that.” The truth lies in more basic demographics, according to Forbes. Country music has only 14% of the national radio audience, with a heavy regional tilt. Keith’s brilliance lies in recognizing that rather than try to appeal to everyone, he should leverage a base that is unusually loyal–a screaming, swaying annuity–and milk it for all it’s worth.


Last September, Toby Keith performed in Houston, Texas. During the show, he surprised a young lady by bringing her up on stage before singing his hit song, "American Soldier." Near the end of the song, the woman's husband surprises her by walking out on stage after coming home early from Afghanistan.