’s newest radio station is 94.7 FM and the music is country.  94.7FM is branding as "NashFM 94.7..Country For Life".   The station was expected by many to be the flagship for a new Cumulus national format.

The first song was “How Country Feels” by Randy Houser, followed by Alan Jackson's "Gone Country".

Sales Dept. Must Be Happy

Respected radio engineer and media observer Scott Fybush notes Cumulus already has a sales force that’s heavily focused on the suburbs, which is where 94.7 will draw the bulk of its audience. And Cumulus’ strong national sales focus should also help overcome a lot of the perceived “ agency bias” that has kept country off the dial in since WYNY 103.5 FM flipped to WKTU 17 years ago this month.

Cumulus Media stopped spinning the NYC “Wheel of Formats” Monday morning at 9:47 am and the wheel settled on country.

The format’s debut caps a weekend of spinning the classy, well-produced format wheel which featured several genres of music buffeted with produced pieces designed to entice listeners to set their clocks and adjust their daily routines to be on-hand to on-air and online to 94.7FM. The production was done by Cumulus' WLS Chicago. 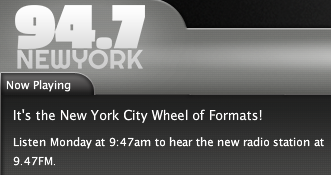 The Wheel of Formats followed a week of simulcast the company-owned WPLJ 95.5 FM.

Radio geeks had a busy week of speculating about the eventual format.  Favorites included Country and Rock.  Reviews on the format introduction are complimentary on the Radio Discussions, New York Message Board. Click Here.

According to David Hinckley at nydailynews.com,  has had a number of country stations over the years, from WHN in the 1960s and 1970s to WKHK and WYNY. They have featured popular hosts including Donna Hanover, Jim Kerr and Dan Daniel.


Station executives have often said country has a loyal listener base around the city, particularly in the suburbs.

According to Hinckley, The problem, the new owners of WYNY said when they dropped country in 1996, is that country didn't have the "sizzle" they needed to attract attention for their station from media buyers who are based in .

Ironically, the country music industry itself has long lamented the absence of a country radio station in , saying that void has made it harder to get the music on the radar of those same media buyers.

Many music people feel country music itself has moved closer to the pop/rock mainstream these days.

Cumulus deferred comment on the new station Monday, saying it will have an official corporate announcement Tuesday.

Here's some early response from listeners: 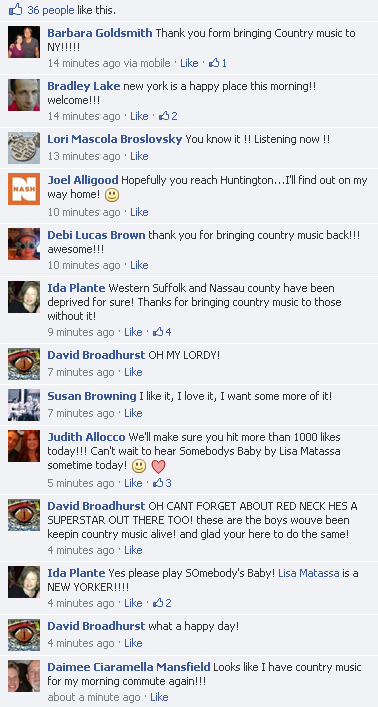